“Mistika Ultima brings together excellent workflow capabilities along with a great color corrector and a powerful compositor, which fits perfectly within our workflow,” said Bernat Aragonés, director of post-production for Antaviana Films. “Mistika Ultima’s ability to work seamlessly with HDR, HFR, WCG, 4K, and UHDTV-1 whilst maintaining real-time playback and interaction is fundamental, as we are dealing with more and more projects with these complex formats. In addition, the fact that we work in stereo 3D and VR projects was also crucial to choosing Mistika Ultima.” 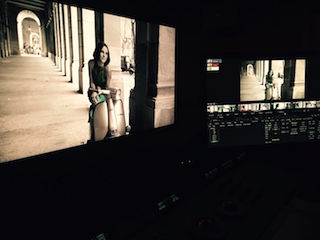 Both Non è un paese per giovani and La Higuera de los Bastardos are 4K productions with 4K and UHDTV-1 deliverables. Recent television work includes the series Merlí and No puc tornar a casa, a documentary about the European refugee crisis for TV3, the Catalan National TV Broadcaster.

“Mistika Ultima provides the workflow versatility we need with Avid integration — which is where our offline edits come from — and good communication with Nuke, which we use for compositing. In this sense, Mistika Ultima is at the very center of our workflow”, said Aragonés.

Antaviana Films does most final VFX adjustments in the screening room with Mistika Ultima. Composers and 3D artists export the VFX files with the necessary layers (IDs, depth, lighting, alpha...) from Nuke and others, and Mistika completes the final touches with the projected image in real-time. This has proven very efficient and is particularly useful for the VFX Supervisor when working with the Director. Mistika Ultima is so powerful that some VFX work never leaves the Misitka Ultima system; it’s easier and faster to start and finish projects in one place. This is especially true for projects requiring conforming, plus those needing rotoscoping and painting, atmospherics like rain and fog, clean-up work, monitor replacement, and other visuals.

“Having the proper tools available — especially when the client doesn’t yet know that they need those tools — is invaluable,” explained Jesús Rodríguez, Antaviana Films senior Mistika Ultima operator and digital cinema department engineer. “We did a music video for singer Andrea Motis which required an intensive use of keyers, shapes, and VFX tools. While typical for feature film productions, these types of complex VFX shots for an entire music video are unique, but having Mistika Ultima turned a challenge into a success.”

“This makes it extremely easy to accommodate work made with any other software package,” Rodríguez added. “It gives us flexibility as well as reliability for both the color pipeline and media asset management. The tools for VFX conforming and managing versions have improved with the recent versions and today we can undertake more complex work at higher resolutions, while still maintaining the creative flow with real-time interaction.”