The School of the Art Institute of Chicago’s Gene Siskel Film Center has announced the full festival schedule for the 28th Annual Black Harvest Film Festival, which will take place in person November 4-20 at the Gene Siskel Film Center and virtually from November 21-27. This year’s festival will be dedicated to Sergio Mims, the co-founder of the festival and its longtime co-programmer and consultant, who passed away October 4. 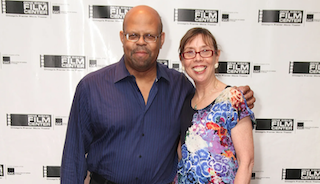 “And he was right; the lineup is joyful, not just in the stories presented, but in the artists highlighted and the parties planned. The 28th Festival is a tribute to Sergio’s dogged determination to suggest the best for our screens, to ensure emerging filmmakers were in the same spotlight as the established auteurs, and his efforts to make local filmmakers feel like stars, and our audience to feel like a family. We will miss him immensely – his bold opinions, his wit, his knowledge, and his camaraderie – and dedicate each moment of Black Harvest to his memory.”

Gene Siskel Film Center executive director Jean de St. Aubin said, “The Black Harvest Film Festival has always been a reunion of filmmakers and film lovers. This year, with the passing of Sergio Mims, it will be bittersweet. But we rejoice in what Sergio has created – a month-long celebration of Black storytelling that has thrived for 28 years and counting. I look forward to seeing our loyal BHFF audience, welcoming new friends, and sharing Sergio stories, along with those on the screen. Please join us in celebrating the full range of the Black experience on film.”

Click here for more information about the festival including a complete listing of films scheduled to be shown http://www.siskelfilmcenter.org.