Brompton Technology has released Tessera v3.4 software with features, Extended Bit Depth and Stacking, which are designed to help film and virtual production professionals improve workflows and image quality. In other news, Brompton Technology recently received three awards for its technology including the Lumiere Award from the Advanced Imaging Society, a Product of the Year award at the NAB show for the innovative features of our Tessera v3.3 software, and an InAVation Award for Best Research & Development. 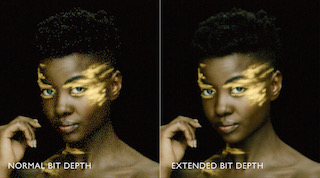 Extended Bit Depth unlocks higher PWM bit depth output with a free firmware update for all existing and new panels fitted with the Brompton R2 or R2+ receiver card. Up to 3.3 additional bits of precision improves low-brightness performance – reducing visual artefacts and bringing out additional detail and nuance in dark areas of the image. This substantial increase in dynamic range offers a significant boost in performance that is hard to ignore for ICVFX and other LED on camera applications.

With Extended Bit Depth, users can also reproduce high dynamic range content up to 10 times darker than previously possible, without compromising peak brightness for HDR highlights. When configured for use on-camera with a shutter angle of 180°, calibrated measurements confirm that a typical 2160 Nits panel using Extended Bit Depth and Dark Magic can render brightness levels as low as 0.00024 Nits – a mere 0.000011 percent of the peak brightness. It does not reduce the peak brightness of the panel, so HDR highlights can still be displayed to their full potential, resulting in a contrast ratio of more than 9,000,000:1 and more than 23 stops of dynamic range.

Any setting adjustment made on the leading processor will be automatically applied to all the others in the stack, saving users time as they don’t need to apply adjustments to each processor individually. It is also possible to customize which parameters will be synchronized across the stack, giving flexibility to suit a wide variety of applications – including both backup (failover) processors and control of large LED volumes. Multiple stacks of processors can co-exist on a single LAN, allowing for versatile setups with quicker and greatly simplified control.

Tessera v3.4 is now available as beta software for evaluation.

For more information, software downloads, and to see examples of Extended Bit Depth in action, visit the Brompton website on www.bromptontech.com.