Burnham-On-Sea’s Ritz Cinema hopes the replace the street art on one side of its building with a large electronic advertising billboard. The Ritz Social Club, which runs the cinema, has applied to the Sedgemoor District Council for permission to introduce the illuminated display on the north-facing cinema wall opposite the town’s post office. 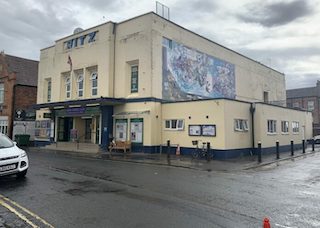 One issue of concern is the fact that the building is within the official Burnham-On-Sea conservation area. Paul Thacker from Turnkey Design Partnership, on behalf of the applicant, said, “The proposal is for an advertising display, with static illuminated advertising, which in our client’s opinion will cause no material harm to either amenity or public safety.”

“Measuring six meters in width and three meters in height, the new advertisement would comprise a pressed metal and reinforced plastic frame which would enclose a digital display,” he said. “It would present a range of static images. A new image will materialize every 10 seconds with the interchange between each image virtually instantaneous. Advertisements would not contain any movement, animation, or special effects.”

He said the lighting on the display would be limited at night and advertisements would be in accord with the Institute of Lighting Professionals’ best practice guidance; The Brightness of Illuminated Advertisements PLG05 2015.”

“The proposed display is operated and regulated remotely, removing the need for frequent site visits,” he added. “What this means in reality is that there are no regular visits by poster vans, usually parking adjacent to the site, removing waste and fuel usage and obviously removing any health and safety implications of putting the signs up with each new campaign.”

Paul Hale, manager of the Ritz Social Club said, “We were approached by an advertising firm about this proposal, and we see it as a great opportunity to tidy up that end of the building, which some feel is looking quite tired. The proposed 15-year contract with the firm would also help to generate a significant income for the club.”