The Chinese action film The Bravest was released at 48 frames per second on Pixelworks’ TrueCut platform. This is the fourth film to be released in high frame rate in China using the TrueCut platform, and a look into the cinematic opportunities to come for filmmakers using this video platform. 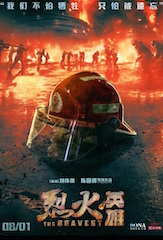 The movie, which premiered in Beijing, grossed box office sales of approximately $85 million in just six days and is now released in both high dynamic and standard dynamic range in theatres across China.

“Our ecosystem partners in China have been gearing up for the release of The Bravest over the past few months, and we are thrilled to see its success,” said Richard Miller, executive vice president of Technology, Pixelworks. “The TrueCut high frame-rate format enabled the filmmakers to deliver an incredible new experience for cinematic motion, consistently across both HDR and SDR screens.”