CJ4DPlex unveiled its new 4DX VR Disk unit at the International Association of Amusement Parks and Attractions Expo, which is taking place now through Thursday in Orlando. 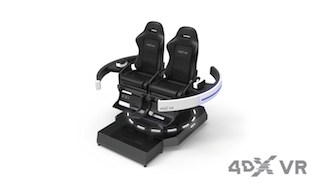 The Disk allows people to explore 360 degrees of virtual reality without having to place their feet on the floor. CJ 4DPlex will also be showcasing its 4DX VR Ride, 4DX VR Sway and Twist, and an upgraded version of its 4DX VR Racing unit.

The 4DX VR Disk is a new product for CJ 4DPlex, which has never before been exhibited. The Disk rotates horizontally and gives the feeling of actually being in a particular environment and able to move around freely. The 4DX VR Disk also gives users the feeling of acceleration and deceleration and can be used with any VR head-mounted device as well as in coordination with any VR content including gaming and short films.

"Our company has been committed to taking our 4DX VR lineup to the next level in order to be an impactful game-changer in the virtual reality entertainment industry," said Byung-Hwan Choi, CEO of CJ 4DPlex. "We are excited for the opportunity to showcase our state-of-the-art VR products to many clients and partners, both old and new, at the expo in Orlando."

CJ 4DPlex recently announced its strategic partnership with US VR Global, one of the world's leading virtual reality and augmented reality technology companies.