Feature film production company Crimson Forest Entertainment Group and specialty theatrical and home video distributor Hannover House have confirmed plans to merge operations under a stock-swap and financing plan, scheduled to be effective May 1.  One of the first new titles to be released under the combined Crimson Forest-Hannover House structure is the $20-million dollar action thriller feature Shockwave starring Andy Lau and Jiang Wu. The film will be co-released together with CMC Pictures in North America next month. 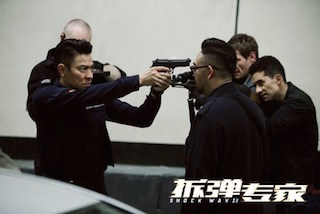 The combined company will immediately launch production activities on a slate of high-profile feature films that will drive the theatrical, home video and international release schedules for the coming years.

Formed in 2010, and financed with investment capital and presales from China, Crimson Forest Entertainment has successfully financed and acquired several films for international and North America distribution. Pali Road was the first Hawaii-China co-production, starring Jackson Rathbone from the The Twilight Saga, Sung Kang from Fast & Furious, Henry Ian Cusick, known for his roles in L.O.S.T., and The 100, and Chinese Celebrity Michelle Chen. The film premiered at the Hawaii International Film Festival and went on to win several awards, including Best Actress Best Cinematography and a Best Director award at the 12th Annual Chinese American Film Festival. The film was released theatrically, both in North America and China, and in Malaysia earlier this month.

Formed in 1993 and growing into one of the top independent distributed labels in North America, Hannover House, Inc. has direct distribution relationships for all major theatre circuits, principal media outlets, and wholesale access to major home video retailers and mass merchants.

"There is a growing need for specialty independent distributors," said Jonathan Lim, CEO of Crimson Forest Entertainment. "There is a lot of quality product out there that is being ignored and we are excited that Hannover House has partnered with us in releasing these films. It will bring much needed diversity to audiences in North America, and growing commercial success for the combined company," he concluded.

"A Crimson Forest and Hannover House merger is expected to fill the demand from independent and international productions, which seek distributors that have direct access to theatrical, as well as Home Video and VOD & Digital sales," said Eric Parkinson, CEO of Hannover House. "We're optimistic about what these new opportunities and corporate structure will bring to Hannover House and our shareholders and excited by the upcoming titles that we will be announcing and releasing in the upcoming weeks, which we fully anticipate will have a substantial impact on the growth of our combined company, " said Parkinson.

Under the newly merged company, the board of directors will include: Jonathan Lim (chairman), Eric Parkinson (CEO), Fred Shefte (president) and Tom Sims (vice president sales).  The existing offices for Hannover House, Inc. and its affiliate Medallion Releasing in Fayetteville, Arkansas will remain as the primary distribution operations office.  The Los Angeles offices for Crimson Forest will serve as the company's corporate and production headquarters, and the Crimson Forest office in Shanghai, China, will continue to operate as the finance office for the funding of new productions and releasing costs. Crimson Forest is also negotiating for the acquisition of other, complementary media companies to add to the enhanced distribution entity.