LA-based post-production house DigitalFilm Tree played a key role in the release of Prince and The Revolution: Live, a high-definition Blu-ray restoration of the March 30, 1985, Prince concert originally filmed in Syracuse, New York’s Carrier Dome, and broadcast to the world via satellite. The film was originally released on VHS in the late 1980s before falling out of print. 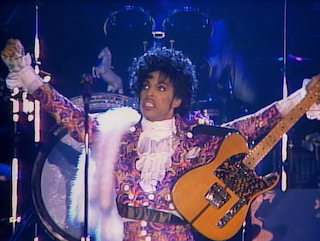 Restoring and digitizing the concert film—shot in the analogue and obsolete NTSC format—was a delicate task, in which DFT’s chief technology officer and senior colorist Thomas Galyon, CSI, and post-production engineer Greg Filkins had to painstakingly rescue the footage from an analogue time of soft blurs and jittery movements and into an HD era of high detail.

Waveform scope monitors were used to adjust and radically correct the color to truly match the vivid hues shot in 1985, rather than the signal-degraded imagery that existed on the VHS. Elsewhere, the NTSC footage—wherein every frame is actually two fields made up of interlocking odd and even lines rather than pixels—was properly interlaced into a new progressive image that eliminated lines altogether and evolved the frenetic footage into a file made of pixels, with each frame its own digital picture rather than NTSC fields.

Data was mined to locate and highlight details never before visible in the original broadcast or VHS release, with Prince and Revolution’s faces, instruments, and ornate costumes and stage design escaping harsh, blown-out VHS obfuscation and returning to brilliant clarity.

Finally, a layer of filmic grain was latticed throughout to mask camera distortions, and small visual effects paint-outs and restoration work removed artifacts and noise reduction, with DFT’s head of VFX Dylan Chudzynski restoring the concert's opening title card by creating clean vector graphics for the welcome scroll in its original font.

A months-long process of devotion, faith, and technology came together to bring Prince and the Revolution back to their galvanizing glory of March 30th, 1985. Now a world of fans will be able to re-experience (or experience for the very first time) a show that was nearly lost to the ravages of time.