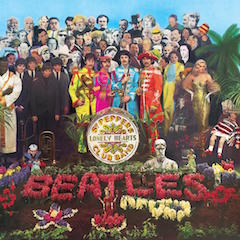 Fans of The Beatles’ Sgt. Pepper’s Lonely Hearts Club Band will be able to experience the album during these one day special events in Dolby Atmos, a state-of-the-art sound technology that places and moves sound all around the audience, including overhead, to truly immerse the audience in the music. The Dolby Atmos mix has been created by Grammy Award-winning producers Giles Martin, the son of George Martin, The Beatles’ original producer, and Abbey Road Studios senior engineer Sam Okell in collaboration with Academy Award-winning re-recording mixer Chris Jenkins.

“The remixing of Sgt. Pepper’s Lonely Hearts Club Band in Dolby Atmos marks a significant milestone for the technology,” said Curt Behlmer, senior vice president, content solutions and industry relations, Dolby Laboratories. “This project demonstrates the capability of Dolby Atmos to bring moving audio to music in a new and innovative way. We look forward to continuing our collaboration with Universal Music Group to transform the music experience.”

“Sgt. Pepper’s Lonely Hearts Club Band is an album renowned for innovation and technical creativity in its storytelling,” said Michael Frey, president of operations and advanced media, UMG. “To celebrate the 50thanniversary of its release, we wanted to reflect this ambition using the latest technologies. Remastering Sgt. Pepper’s Lonely Hearts Club Band in Dolby Atmos has enabled us to give fans a new way to experience this iconic album.”

“This is one of the most important albums of all time,” said Martin. “Each track has its own character and imagery, building song by song across the record as a whole. The Dolby Atmos mix is truly immersive, placing the audience inside the recordings like never before."