Executives at Distro TV say they are about to make history as the first independent, free ad-supported streaming television platform to debut an original feature film with the global premiere of the new Hispanic film, Escándalo Secreto: En Plena Cuarentena. The comedy feature film, directed and written by Jorge Cano, premieres February 25. This marks the latest installment in DistroTV’s new, free-to-stream DistroTV Español channel bundle and comes on the heels of DistroTV’s recent expansion of its global distribution footprint, which now includes Latin American audiences. 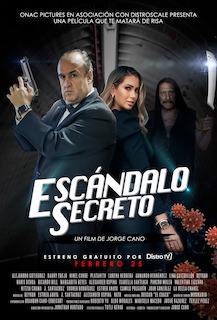 “We were thrilled to work with such a diverse and talented group of artists on the making of this film, and to have DistroTV exclusively stream the worldwide premiere just makes sense,” says the film’s director, Jorge Cano. “DistroTV prides itself on streaming diversified content, content that will suit audiences of all backgrounds and interests. This movie premiere is special, because, to us, it represents the start of a movement, one in which all streaming services take a better hand in helping to profile more creative talent, and to appeal to more viewers in the process.”

“Right on the heels of our huge expansion into Latin America, we could not be more excited to break ground in the FAST industry and announce our debut of the first-ever direct-to-CTV original feature film,” said Navdeep Saini, co-founder and CEO of DistroScale, parent company of DistroTV. “Staying true to our commitment to continue to grow our content library to meet the needs of our growing and diverse global audience, we are so proud to premiere this original film on our platform. By also bringing exclusive Spanish-language content into our existing territories, we can ensure that this film will be seen all over the world in a time when we all could use a good laugh.”