Euro Media Group, a leading European global provider of media services, has expanded its digital services division with the purchase of new SubtitleNext licenses to support major productions. The SubtitleNext platform is used for captioning offline content in real time and is embraced by a growing number of film industry professionals across the globe. 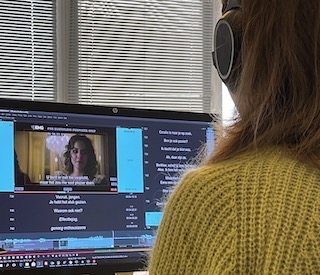 Current notable projects using SubtitleNEXT at EMG include commercials, films, and television series such as Dexter: New Blood, local productions Déjà Vu, Stamnummer 1, Mauve, including HBO shows And Just Like That and Euphoria.

Subtitler and translator at EMG Belgium, Elisabeth Barber said, “SubtitleNext is the only subtitling brand we now use and has become the exclusive subtitling software platform here, so we use it for all our subtitling projects. If ever there is a slight technical issue, we know we can always count on the prompt response from the SubtitleNext support team whenever we need them.”

Barber said, “Two features we use a lot here are the ‘compare’ and ‘fix titles’ options. However, what SubtitleNext really does well which makes it stand out, is the vast amount of keyboard shortcuts it lets you assign to timing operations. One of them provides the option to add or deduct one frame to or from the in and out cue of a subtitle. This operation can be done while the video is still playing, so this is very handy indeed. The other key feature in SubtitleNext we really like is the capability to simultaneously change the ‘out cue’ of a subtitle, and the ‘in cue’ of the next subtitle, and vice versa.

The ‘auto out cue’ short key, which automatically sets the ‘out cue’ at the desired reading speed specified in the settings, is one we use all the time. As far as we know, these features are not available in any other subtitling program.”

With two new colleagues joining the team recently, Barber added, “It was very easy to get them started with SubtitleNEXT, since the program is so intuitive.”

Ann Van Bogaert, head of EMG’s subtitling and translation department added, “As we support the needs of our growing department at EMG Belgium and meet the rise in demand for content, we rely on a system that delivers powerful, flexible, and future-ready subtitling workflows that can fit into our strategy. SubtitleNext’s development team always steps up to the plate, demonstrating passion for innovation with exciting new features and capabilities that will support our continued growth.”