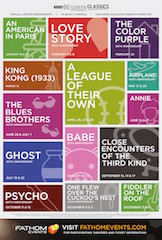 Among the highlights are the first national theatrical release of 1933’s King Kong in more than 60 years; the tear-jerking Love Story for Valentine’s Day; the 60th anniversary of Alfred Hitchcock’s Psycho; and a rare big-screen appearance of Fiddler on the Roof.

Now in its fourth year, the TCM Big Screen Classics series continues to grow in popularity. In 2019, many events in the series experienced sold-out audiences and ranked near or at the top of box-office results – showcasing the enduring appeal and popularity of gathering in a darkened movie theater to see the sights and hear the sounds of the best Hollywood has ever created.

“2019 was a banner year for Fathom and the TCM Big Screen Classics series, with record levels of attendees and a bigger box office than ever before,” said Fathom Events vice president of studio relations Tom Lucas. “That success challenged us to search out some of the greatest films ever released, including iconic titles from over six decades, featuring world-renowned filmmakers, legendary stars, Best Picture winners, and epic productions – all meant to be seen on the big screen.”

“This is a slate of films to make every movie lover genuinely excited, and our partnership with Fathom Events means we can bring these films to a bigger audience than ever. This series celebrates the magic of the movies all throughout the country, proving that there is nothing that matches the joy of seeing these films in a movie theater,” added Genevieve McGillicuddy, vice president of enterprise and strategic partnerships, TCM.

The 2020 lineup for the TCM Big Screen Classics series is:

Close Encounters of the Third Kind (1977)