With entries now being accepted, the judging panel is building up for the 2022 FilmLight Color Awards. The awards, which recognize the finest work from colorists using any technology platform and working in any genre, will be presented at EnergaCamerImage in November. 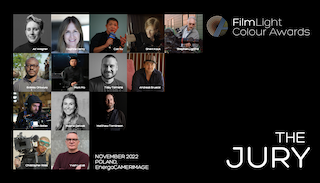 “The FilmLight Color Awards are very deliberately pan-industry, so it is really important that we have creative and technical viewpoints reflected in our judges, as well as the global viewpoint,” said Jacqui Loran, director at FilmLight. “We are continuing to work to make our panel as representative as we can, as we move towards the judging phase later in the year.”

The 2022 Color Awards jury members include:

Ari Wegner, ACS, an Academy award-winning Australian cinematographer and first female recipient of the BSC Best Cinematography in a Theatrical Feature Film award, for Jane Campion’s The Power of the Dog.

Yvan Lucas, French born senior colorist at Company 3 in Los Angeles. His career has involved creative collaborations with a long list of iconic cinematographers. Highlights include The Irishman, Snowpiercer, Once Upon a Time in Hollywood, Django Unchained, Argo, Shutter Island, Inglorious Basterds and Seven.

Andreas Brueckl, creative director and head colorist at Genomedia Studios in the United Arab Emirates, has gained an excellent reputation in Europe, the Middle East and Asia and can now also be found consulting production companies and over-the-top platforms on visual and technical strategies.

Maxine Gervais, senior colorist at Picture Shop in Los Angeles, has worked on countless blockbusters, critically-acclaimed feature films, and hit episodic shows. Gervais has established an impressive career as a finishing artist and is now just short of 100 credits to her name.Sherri Kauk, an Emmy-winning cinematographer and 2020 Variety Rising Star cinematography highlights include Sex Appeal (Hulu), the SXSW feature Loev screening on Netflix, and season 3 of the Snapchat series Endless Summer.

Stephen Lighthill, ASC, Oscar-nominated cinematographer and president of the ASC 2020-2022 is a regular jury member at the Camerimage cinematography festival. He is currently the discipline chair for cinematography at the American Film Institute Conservatory.

Mark Ma, deputy general manager of China Film Studio and highly successful director and producer has been a pillar of the Chinese cinema industry, helping to implement digital intermediate in film production in China in the early 2000s.

Bobola Oniwura is creative director and lead colorist at Ingenuity Pictures in Nigeria, working on films for Nollywood, Africa’s biggest film industry. He is a full member of the Colorist Society International and a certified trainer.

Toby Tomkins, color evangelist and all-round king of the craft, Tomkins is Cheat’s founder and a senior colorist. Over a decade of experience has earned him high-profile commercial clients, and an extensive portfolio of award-winning TV shows, short and feature films.

Matthew Tomlinson is a color scientist at Harbor, where he delivers color consistency and creative look development for feature films, episodic, documentary, and premium advertising from set-to-screen.

Eben Bolter, BSC, has built his career as a cinematographer by concentrating on film and TV dramas with bold visual stories. He was awarded the BAFTA breakthrough award in 2016 for his work on the film Chicken and is currently shooting HBO’s The Last of Us.

The call for entries is now open, with a deadline of 31 July. A shortlist will be announced in the autumn, with the winners unveiled in November at this year’s EnergaCamerImage, in the 30th year of this prestigious festival.

Details on nominating a colorist or project for the awards, and more information on all the members of the growing jury, can be found at www.filmlightcolourawards.com/