Filmworkers Recreates Chicago History for DDB and The Field Museum 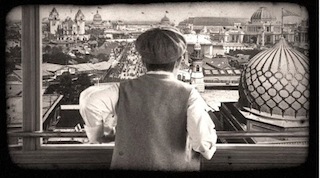 The campaign promotes the Museum’s current exhibit marking the 120th anniversary of the Fair and featuring artifacts from the landmark event. One spot offers an over-the-shoulder view of a boy riding the Fair’s famous Ferris wheel (designed by engineer George Ferris) and looking out across the Exposition grounds. “See what he saw!” exhorts the voiceover, “The wonders of the 1893 World’s Fair.” A second spot shows a similar view of a woman gazing at a mammoth dynamo as an electrical arc causes her hair to stand on end.

Filmworkers VFX director Rob Churchill directed the spots. The boy and the woman seen in the foregrounds of the two ads were costumed actors. The background environments were constructed from historical still photographs and CGI elements. Churchill used a series of archival photos to create the Exposition grounds and a computer editing system to arrange them in 3D space. Virtual camera movement created the illusion that the boy is rising in the air with the Ferris wheel.

“I painted in extra detail to reveal more of the buildings than can be seen in the photographs,” explained Churchill, a classically-trained fine artist. “I used a map of the fairgrounds for reference to ensure accuracy.”

To further the 3D illusion, Churchill added computer-animated flags into the background. He also added an animated model of an “L” train. “They were called alley trains in those days,” Churchill said. “They had hoped to have them running to Jackson Park by the time of the fair, but they were actually ahead of schedule and the trains ran much farther. We thought it would be fun to add that in.”

The second spot was created in a similar manner. Churchill created the dynamo from historical photographs and added CGI parts to simulate motion. A much more old school technique was employed to make the woman’s hair stand on end. “We used the old rub-your-hair-with-a-balloon trick,” said Churchill.

Churchill says that it was fun see the project through from beginning to end and to recreate one of the most memorable chapters in Chicago’s history. “It was super fun,” he recalled. “We were all excited. During the last take, everyone was cheering because it was all going so well.”