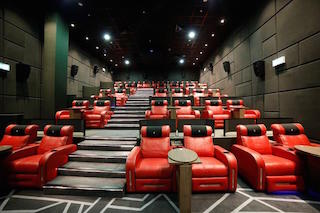 FLiK Cinemas has deployed a combination of Volfoni’s 3D cinema technology products, including the SmartCrystal Cinema NEO series and the award-winning SmartCrystal Diamond series.  The initial deployment was for their new premium multiplex in Lagoona Mall in Doha, Qatar. As a follow-on deployment, FLiK Cinemas is currently completing their second premium multiplex in Mirqab Mall in Doha, which will also feature Volfoni’s 3D cinema technology products.

“As the first platinum and gold class multiplex in the GCC region, one of our top priorities was to deliver to our customers the finest and sharpest 3D images possible, as was originally conceived by the films’ creators,” said Andrew Marambos, CEO of FLiK Cinemas. “With Volfoni’s 3D hardware equipment, we are pleased to have successfully achieved this priority.”

“Destiny Seating partnered with Volfoni for FLiK Cinemas’ 3D hardware requirements with great pleasure,” said Rudi Patoir, CEO of Destiny Seating. “Our partnership with Volfoni has just recently started, and we have thoroughly enjoyed the collaboration. We can say without exaggeration that their 3D know-how and their flexibility was key for us as a system integrator to provide top-class service to FLiK Cinemas.”

“By providing pioneering companies such as FLIK Cinemas and Destiny Seating with our SmartCrystal Cinema 3D technology, we are cementing our growth in Qatar and in the important Middle East market,” said Alain Chamaillard, managing director of Volfoni EMEA & CIS.  “We see a continued rise in the premium cinema experience, across the multiple regions that we serve. Volfoni is thrilled to support FLiK Cinemas in their pioneering vision of a Platinum-class experience.”

FLiK Cinemas, part of the Al Mana Group of Companies, was founded to provide a five-star concept for cinema services across Qatar and the Middle East region. The company is headquartered in Doha, Qatar and its first Cinema was opened in Lagoona Mall in Doha in February.  Future theatres will open in Mirqab Mall in October and in Doha Mall in the coming months. Their latest multiplex in Mirqab Mall will also feature 3D screens fitted by Volfoni 3D hardware systems, due to FLiK’s successful results in their first multiplex at Lagoona Mall. FLiK Cinema’s theater in the Lagoona Mall features three gold-class theaters and one platinum-class theater.