The Global Connections for Women Foundation honored New York Women in Film & Television executive director Cynthia López last weekend as one of its Top 100 Women in the World. In doing so, the foundation continued its tradition to recognize women’s accomplishments in exclusive settings that allow them to celebrate equity, diversity, and inclusion. This year’s theme was “Gender equality today for a sustainable tomorrow.” 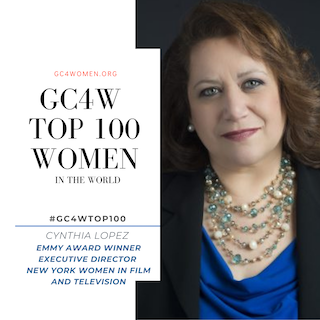 López is an award-winning media strategist and former commissioner of the New York City Mayor’s Office of Media and Entertainment, where she implemented strategies to support film and TV production throughout the five boroughs. Prior to working as commissioner, López was executive vice president and co-executive producer of the award-winning PBS documentary series American Documentary | POV and was involved in the organization’s strategic growth and creative development for 14 years. López is a founding member of the board of directors of the National Association of Latino Independent Producers.

“I am honored to be included in this prestigious group of women leaders from across all areas of business and walks of life,” said Lopez. “It is crucial that women lift one another up – that is how we will reach new heights and achieve true gender parity. During this time of continued uncertainty, it will be a joy to come together to celebrate how far we have all come. Thank you, GC4W for this incredible honor.”

“NYWIFT’s continued success and growth – during a global pandemic, no less – is due in large part to the brilliant, strategic, and endlessly creative leadership of Cynthia Lopez. We are thrilled to see her excellence recognized by GC4W, an organization with its finger on the pulse of social change, coming from a global perspective,” said NYWIFT board president Jamie Zelermyer.

The Global Connections for Women Foundation is an award-winning 501c3 not-for-profit organization which, for the past nine years, has been at the forefront of advancing women’s rights, promoting gender equality, and increasing access to quality education for women and girls globally. It has honored and recognized the accomplishments of the TOP 100 Women in the World including Dr. Joyce Banda (Former President of Malawi), Congresswoman Barbara Lee, US Congress, Rebecca Minkoff (Renowned Fashion Designer), Chief Temitope Ajayi (African Business Female Icon), Paula Cole (Grammy Award-Winning Artist), to name a few. IT has held the GC4W’s Top 100 Women celebration at the Harvard Club of New York City, the Library of Congress in Washington, DC, and now, virtually.