Goldcrest Post sound artists were honored for Sound Editing and Sound Mixing at the Creative Arts Emmy Awards for their work on Netflix’s The Queen’s Gambit. 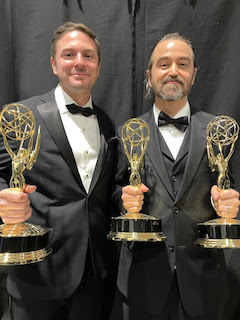 In total, The Queen’s Gambit picked up ten Emmy Awards during the ceremonies held Saturday and Sunday nights on the event deck at L.A. Live, more than any other program. It also won awards for casting, cinematography, costumes, make-up, music composition, music supervision, picture editing and production design. The series is nominated in six additional categories whose winners will be announced during the primetime Emmys broadcast on September 19.

“We extend our heartfelt congratulations to Gregg, Eric and their collaborators on their well-deserved awards,” said Goldcrest Post managing director Domenic Rom. “We were extremely proud to work with Netflix on their outstanding series. Our team faced numerous technical and logistical hurdles on this project, due to the pandemic, but they rose to the challenge and the results speak for themselves.”