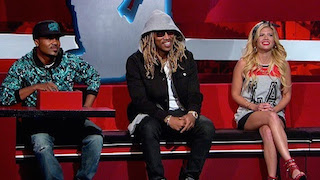 Hollywood Center Studios hosts MTV’s hit comedy series Ridiculousness, which recently completed shooting its fifth and sixth seasons. The show, in which host Rob Drydek presents the most hysterical and absurd videos found on the internet, is shot multi-camera style on Stage Nine at Hollywood Center Studios before a live audience.

Hollywood Center Studios supplies the show with a stage, an HD control room, HD camera systems, lighting, make-up and costume rooms, a green room, parking and other facilities. Production for seasons five and six was completed in three two-week sessions with two episodes produced in each shoot day. “We have a demanding and unusual production schedule,” says Supervising Producer Josh Green. “We shoot ten episodes in two weeks. It could be stressful, but Hollywood Center Studios’ one-stop-shopping makes it easy. When we come in, everything is there.”

These shoots can be unpredictable since much of what happens on the show is spontaneous and unrehearsed. One episode featured an appearance by Floyd Mayweather Jr. When Drydek challenged the boxer about his reputation for traveling with a million dollars in cash, Mayweather promptly emptied a Gucci bag containing the cash on the stage floor.

Recalling the episode, Green notes that he appreciates the security that comes with shooting on a gated lot. The iconic studio also provides easy access for celebrity guests, hassle free audience management and a cool vibe. “They always accommodate us,” Green says. “We’re happy to be there.”