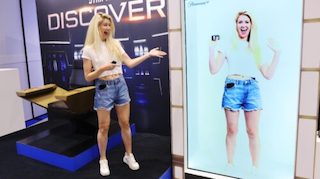 The company says the capsule is a full plug-and-play 4K interactive display system that integrates the physical world and metaverse. The technology was first revealed at CinemaCon Las Vegas in April.

Major Cineplex plans to use the Capsule to allow audience members to meet and greet with real-time 3D life-size holograms. The talent will also be broadcast live on screens from anywhere in the world.

“We are delighted to be the first cinema operator in the world to offer this exciting new technology to our customers,” said Visha Pulvaraluk, CEO of Major Cineplex. “Hologram technology was once the domain of science fiction, but with Capsule we’ll be able to make that a reality for our audience and look forward to creating some truly unforgettable cinematic experiences.”

Larry O’Reilly, CEO of ARHT Media, added, “Now more than ever we see a need for brick-and-mortar movie theaters to come up with new and innovative ways to get audiences through their doors. We can’t wait to start working with Major Cineplex to give their audiences amazing experiences they can’t afford. Get it at home.”

The capsule will be shown at CineAsia in Bangkok from December 5-8 as part of a show by the flagship Cineplex.

The first cinema unit will be installed at the Paragon Cineplex in Bangkok’s Siam Paragon district. at a later time.