The Motion Picture Sound Editors association hosted a special in-person reception for winners in the 69th Annual MPSE Golden Reel Awards on March 26th at the Bonaventure Hotel in Los Angeles. Sound Editors honored for their work in feature films, long-form and short-form television, animation and documentaries were presented with gold GRA statuettes and joined with colleagues in celebrating their shared craft. 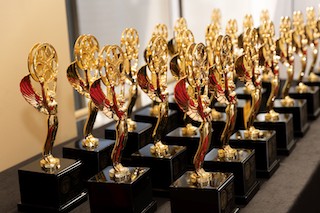 The event was a relaxed and intimate affair and had a jubilant mood as, for many of those on hand, the night offered an opportunity to mix with colleagues for the first time in two years. “It was a special night and a wonderful way to reconnect with old friends,” said MPSE president Mark Lanza. “Our board organized this event to recognize the fantastic work performed by our members and end the year on a high note.”

Also on hand were the sound teams from West Side Story, Infinite, The Underground Railroad, Only Murders in the Building, Wu-Tang, Call of Duty, Love Death + Robots, Arcane, Cliff Walkers and other award-winning projects.

The 69th Annual MPSE Golden Reel Awards ceremony was held on Friday, March 13th as a fully virtual event. Sound editors and others from around the world came together in a spectacular virtual event space inspired by real-life locations in New York and Mexico. Highlights of the event included appearances by director Ron Howard, honored with the MPSE Filmmaker Award, and Anthony “Chic” Ciccolini III, who was presented with the MPSE Career Achievement Award.

The Motion Picture Sound Editors expect to return to a fully in-person event for the 70th MPSE Golden Reel Awards in 2023.