Post-production finishing for season six of TNT’s police drama Major Crimes is currently underway at MTI Film, continuing a relationship that began with the show’s debut in 2012. The facility faces tight deadlines and significant technical and creative hurdles in delivering each of 13 episodes included in the current season. 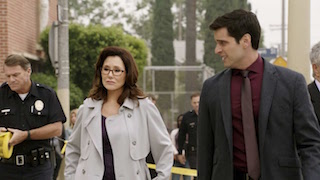 Tanner Buschman is in his third season as final colorist on Major Crimes. He works with series associate producer Lauren Carraway, and DPs Kenneth Zunder and David A. Harp in finalizing the look of the show, which is principally captured via three Arri Alexa cameras. Overall, says Buschman, the series has a crisp, realistic look and rich color palette, with special attention given to sharpening light and contrast, adjusting skin tones and sculpting scenes to drawer viewer attention to points of focus.

Buschman enjoys the most creative latitude in coloring crime scenes and other exotic locations. He recalls a scene from the current season involving the discovery of a child’s body on the lawn outside a Catholic Church. “It was obviously a very tense emotional scene, but it was shot on sunny day,” he says. “We drew down the color to make it appear as though the scene is unfolding under overcast skies. It feels as if it might rain at any minute.”

Opportunities to use subtle color adjustments to help tell the story occur throughout the series, Buschman adds. “If we’re at a crime scene at night, we might add some cyan or blue to create a cold feeling,” he says. “If it’s a flashback, we’ll give it a stylized look so the audience knows immediately that we’ve moved into the past. But our primary goal is to create a clean, consistent look, and ensure the talent looks great.”