The Hill Country Group has announced plans for Hill Country Studios, a film, virtual production, television, and streaming complex to be built in San Marcos, Texas, a short distance from Austin and San Antonio. With a mission to unbridle creative storytelling through innovation and emerging technologies, the company says the $267 million project will be the first and largest studio of its kind in Texas. 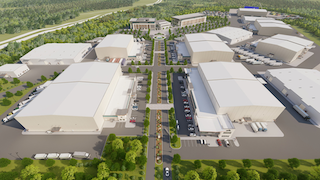 “What started as a dream to elevate the production industry in Texas, is now becoming reality,” said Cory McLoud, co-founder and CEO of Hill Country Studios. “Recognizing the revolutionary potential of virtual production, Hill Country Studios aims to place the film industry in the epicenter of the innovation corridor in Texas. We couldn’t think of a better place to propel the entertainment industry with a world-class studio space than our own backyard.”

The multiuse project, located at the entrance of the La Cima Master-Planned Community, will also feature modern lifestyle and collaborative workplace amenities, headlined by post-production facilities, a 50-seat screening theater and a full-service restaurant and coffee shop. Twenty-five acres will be reserved for vendor and commercial space built to serve both the studio and surrounding community.

“We’re looking forward to seeing the opportunities this project will bring to San Marcos,” said assistant city manager Joe Pantalion. “The city is excited Hill Country Group has chosen to invest in San Marcos for this project and we’re confident the film production studio will positively impact our local businesses and our community’s overall economy.”

Architecture and design will be led by architect Bill Foley of Foley Design, while media consultant David Godfrey will join the team in studio operations. Virtual Production design and management will be led by Vision’s team of designers and integrators, who bring a wealth of film and live production experience to the project.

Hill Country Studios is slated to begin construction in early 2023.