NYWIFT, Museum of the Moving Image Present The Big Steal

New York Women in Film & Television and the Museum of the Moving Image will present the screening of NYWIFT member Nadia Tass’s film The Big Steal on July 31. Tass will be available for a post-screening discussion. 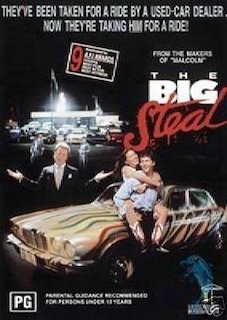 The film is being presented as part of the museum’s Pioneering Women in Australian Cinema program.

The Big Steal was released in 1990. The warm-hearted teen comedy caper was the third feature for filmmaking couple Tass (director) and David Parker (writer and cinematographer). A car-lover’s delight, the film invigorates the 1980s teen date-comedy formula with an Aussie sensibility, showcasing the streets of inner-city Melbourne and a sunny Oz-rock soundtrack.

Teenager Danny (a baby-faced Mendelsohn, in an early role) wants to woo his crush Joanna, promising a ride in his 1973 Jaguar. Except that he doesn’t have one. Unwanted and unintended consequences ensue when he decides to trade in his dowdy 1962 Nissan via a sketchy car dealer.