Polish Cinema First to Offer Payment with the Eye

The Polish technology company PayEye is celebrating one year of market presence and to mark the occasion has added Nowe Horyzonty Cinema in Wroclaw as a partner. It becomes the first cinema in the world with an innovative iris payment system. Until recently, only in films and in the visions of technology enthusiasts was it possible to pay with the eye.

“This is not the script for the next part of the cult movie The Matrix,” says Daniel Ratuszniak, president of the Nowe Horyzonty Cinema. “Such a feature is very real and available. By introducing payment with the eye, we will combine not only security but also modernity and convenience for cinema lovers. We are not only open to innovative phenomena in cinema, but also to new technologies, which is why we joined the pilot project with PayEye.”

“The Nowe Horyzonty Cinema is not only an important partner, but also a place which sets new directions in the presentation of interesting repertoire and intuitive and friendly customer service,” says Krystian Kulczycki, CEO of PayEye. “These values are also close to us, which is why we are pleased that the Nowe Horyzonty Cinema is the 150th place on the eye payment map. We have only been operating for a year, and although we originally planned to conduct the pilot in several dozen locations, the number of 150 partners is a great honor and expression of trust for us.” 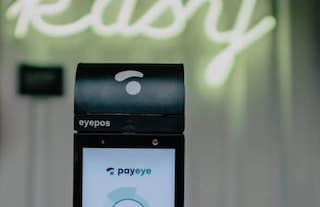 To celebrate the pilot year, the companies have announced a special surprise. From June 24-30, a single repertory film voucher will be added as a gift to each of the first 150 eye transactions.

PayEye says it was the first in the world to bring eye biometrics to commercial use in payments. Scientists, IT and finance experts were invited to join this original project, which resulted in a unique and convenient payment system based on innovative solutions. The PayEye ecosystem, prepared as a result of the team’s work, is currently the most secure user identification system using iris biometrics. Such a payment is safe, both from a sanitary point of view and to safeguard finances against possible theft. Today, few people recall a time when paying by card was something as unique and innovative as today’s eye payment. Even then, institutions introducing card payments had quite a challenge ahead of them, which today seems to be taken for granted.

Early June marked the 30th anniversary of the introduction of the first payment card in Poland. Initially, the use of this form of payment was severely restricted. Not so long ago, payment at a kiosk or grocery store was almost impossible or subject to limits. Today, we can pay by card practically everywhere, but it took the world several decades for this type of payment to become widespread. Today we have completely different times, which is why PayEye wants to shorten this time, which is why it is conducting a large-scale pilot. This pilot is slowly coming to an end and preparations are underway for a nationwide roll-out, with the next stage being Europe and the world.