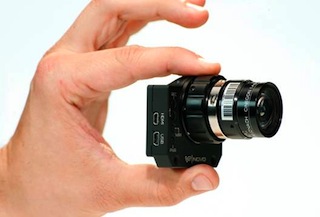 Filmmakers must submit a short film script to Radiant Images (www.radiantimages.com) by September 27.

Five finalists will then be selected and each will be awarded a one-week Novo camera kit rental, complete with lenses and monitors, to shoot a short film not to exceed five minutes – using only the Novo camera. A Radiant Images jury will review the films and the winner will receive a two-week complete Red Epic camera package, valued at more than $7,000. For full contest details, visit www.novocamera.com.

Radiant Images is introducing the Radiant Novo Challenge to budding filmmakers this week at the ShortFest 2013, set for June 18-24 in Palm Springs.

“We created the Radiant Novo Challenge as a way to show our support for up-and-coming filmmakers and help them achieve their vision, just as we already do for the many veteran filmmakers who rely on us for custom gear and expertise,” said Michael Mansouri, co-founder of Radiant Images.

The competition also will provide young filmmakers with the opportunity to work with the Novo, the world’s smallest digital cinema camera. The new lens-friendly action camera, co-created by Radiant Images, removes the cinematic limitations of the GoPro Hero3 for filmmakers. The simply-designed Novo, released in February and available for rent only, fits in the palm of the hand, giving filmmakers freedom to mount them almost anywhere. Cinematographers continue to flock to the Novo, which is presently being used on the sets of three major motion pictures –Transformers 4, Ten and Need for Speed.

Radiant Images is a Gold-level sponsor of the Palm Springs International ShortFest, North America’s largest and best-attended film festival devoted to the art of short films. ShortFest, a qualifying film festival for the Academy Awards, will present 330 films from 49 countries.

Ric Halpern, a rental agent at Radiant Images who is administering the company’s new film festival sponsorship program, said the Radiant Novo Challenge will provide budding filmmakers with an opportunity to showcase their talents.

“We’re so excited to be a part of this incredible film festival that celebrates the art of the short film,” Halpern said. “We also hope through our film competition to identify some new talented filmmakers and give their careers a boost and get them noticed. It’s going to be fun.”