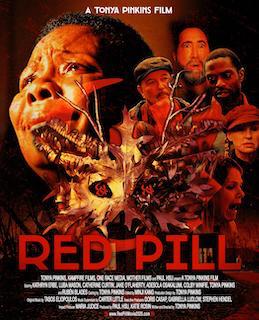 Attendees can kick back and view the film in the Flymaxx movie theatre, play the Red Pill game, and watch live performances in the Metaverse’s art gallery.

Red Pill is a nightmare thriller directed, written, and produced by Pinkins that follows six liberal friends as they travel to Virginia during Election Weekend 2020. Cassandra, played by Pinkins, is a Black American woman who is fearful about the fate of the country during the 2020 election. She reluctantly travels with her best friend and land preserver activist Rocky (Ruben Blades), his wife Emelia (Luba Mason), her roommate Lily (Kathyrn Erbe), friend Nick (Jake O’Flaherty) and partner Bobby (Adesola Osakalumi) to canvas in newly blue Virginia. As the group arrives at their “Super-Host” housing location, they encounter signs of possible trouble and the fight for the country quickly turns into a fight for their lives.

Red Pill was written by Pinkins to serve as a scary wake-up call about American politics. “I wrote my own personal Get Out,” she said. “To live as a Black woman in America is to be at the mercy of random senseless violence. The violence in the film is sometimes the release from the tension of worrying when it’s going to hit.”

Since early 2021, the Harlem Film House Metaverse has hosted numerous events such as Hip Hop Film Festivals and Revolution Music Festivals. Red Pill is the first major film to be screened there.