Severtson Screens will feature its SAT-4K cinema screen line during Kino Expo 2016, held in Saint Petersburg, Russia, from September 19-23 at the Expofurum Congress Center. The SAT-4K is now shipping.

“Made in the USA, the SAT-4K is the ideal projection screen for virtually all cinema requirements,” explained Toby Severtson, president and CEO of Severtson Corp. “Like perforated screens, the sound stage can be placed directly behind the screen at the same horizontal axis, allowing the vocals and the special effects to be completely in sync with the brilliant images on display. Due to almost no audio frequency loss, the SAT-4K screen allows for a completely immersive cinema experience.” 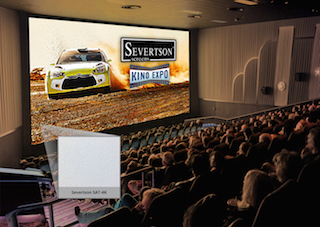 Currently available up to 16 feet in height and nearly limitless in length, the SAT-4K cinema screen meets or exceeds all industry standards for optimum video and acoustic performance, with reference quality reproduction of the digital image combined with true fidelity of the original soundtrack. Severtson plans for expanded height availability later in 2016.

“When we first saw a demonstration of Severtson’s SAT-4K material, we did not have any sound quality loss with high pitch frequency audio, as such loss is apparent in vinyl screens,” said Ricardo LaPorta, South America territory sales manager for Christie Digital Systems. “The SAT-4K has tremendous sound transfer capabilities, along with remarkable visual clarity. To say we are impressed is an understatement.”

LaPorta added that due to the SAT-4K’s performance, they are now using the SAT-4K screen in Christie’s Sao Paolo, Brazil training facility.

"The collaboration of Severtson to the Christie/Dolby booth during Expocine 2015 was key,” said Carlos Watanabe, regional director, Latin America at Dolby Laboratories. “They contributed to the guarantee that the public had the best image in partnership with the best cinema sound, Dolby Atmos, which was clearly demonstrated during the event."