The sixth annual Digital Cinema Media Awards, held in partnership with Campaign, took place this week at BAFTA. Leading figures from the media and advertising worlds came together to celebrate and reward the most impactful cinema advertising work created by the industry. The big winners on the night were Disney+ The Walking Dead and Publicis Imagine’s Frighteningly Good: How Disney+ Jump Started Their 18+ Audience campaign. 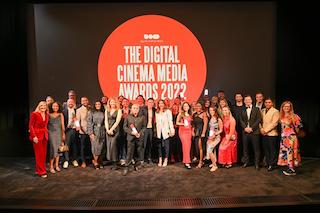 After The Walking Dead became exclusively available on Disney+, Disney needed to shift perception that the service was not just for families and kids. On-screen activity included a :30-second gold spot brand ad adjacent to big cinema horror hits Censor, Night House, The Candyman, and Don’t Breathe 2 to ensure the exact target audience was reached. This was followed by a :40-second bespoke ident created by DCM Studios that played with the audience’s imagination through the power of 5.1 surround sound and a black screen, rather than relying on visuals.

Disney took advantage of a captive audience in a dark auditorium and built anticipation and imagination by overly stimulating the senses, with impressive results that shifted perceptions and brand awareness. The campaign was termed “powerful, brave and innovative” by the judges. It won the award for Best Bespoke for Cinema campaign, as well as the overall Grand Prix prize.

The Digital Cinema Media Awards celebrate and reward the best cinema advertising and prizes were handed out in six categories this year, with one overall Grand Prix prize.

The award winners included a high number of entries from a broad mix of brands and agencies, showcasing more cinematic innovation than ever before and how brands have really embraced cinema’s unique offerings beyond just a single placement in the ad reel.

Karen Stacey, CEO, DCM commented, “It is so good to bring back the Digital Cinema Media Awards this year and shine a light on the best of the best work, which is inspired by great media ideas that showcase the powerful use of cinema and the important role it plays as part of advertisers’ AV schedules. I hope our winning campaigns will continue to set a high standard for smart media planning and inspire how cinema can be used differently across a whole variety of media challenges and budgets.”

Click here for more information about the awards, including all the winners https://www.dcm.co.uk/awards