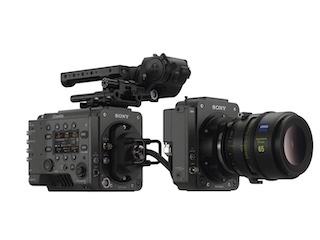 "The Venice 2 was born from the voice and feedback of the cinema community," said Theresa Alesso, president of imaging products and solutions Americas, Sony Electronics Inc. "Thanks to the continued feedback of our customers, we have been able to fuel the ongoing development of this powerful full-frame cinema camera with the mission to enable more creative freedom."

The Extension System 2 is a tethered extension system that allows the camera body to detach from the actual image sensor block with no degradation in image quality.

Thanks to its small size and light weight, filmmakers have greater creative freedom with the ability to shoot in tight spaces, go handheld or mount the Extension System 2 on gimbals and cranes.

"The original Venice Rialto System has been such a great resource to give me added flexibility for feature films,” said Oscar award-winning cinematographer Claudio Miranda ASC. “On Top Gun: Maverick, the small form factor of three Venice Extension System, paired with three cameras, allowed us to place 6 Venice cameras, in the cockpit of an F-18 fighter jet to capture the excitement of flying in-camera. The extension system has given me the flexibility to be as creative as I want to be.”

Academy-award-winning cinematographer Erik Messerschmidt has been shooting with the Venice 2 Extension System on an upcoming project. He said, “The Venice 2 Rialto has been a huge asset for me. It frees us to use the sensor we already love in ways we never could without it.”

The new Venice Extension System 2 will be available in early 2023 for approximately $18,999.99 USD and $24,399.99 CAD. It will be sold at a variety of Sony's authorized dealers throughout North America.