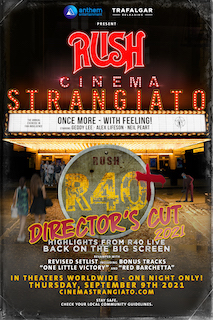 This global fan event takes an alternate director’s cut of the 2019 feature, giving audiences a special look into R40 Live, with a revamped setlist including new additions of bonus tracks One Little Victory and Red Barchetta, as well as Cygnus X-1/ The Story So Far featuring Peart's final recorded drum solo masterpiece.

“We are proud to once again bring Rush to big screens worldwide in celebration of 40 years of Moving Pictures,” said Kymberli Frueh, Trafalgar Releasing senior vice president of content acquisitions. “Rush has such a passionate following and we’re pleased to be able to share so many never-before-seen performances with fans through this new Director’s Cut of Cinema Strangiato.”

Trafalgar Releasing can be found at www.Trafalgar-Releasing.com.