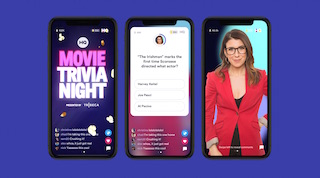 HQ Movie Trivia Night takes the core components of HQ Trivia that players know and love and rewards movie fans with prizes based on their knowledge. The questions cover a range of topics, from award-winning movies, film quotes, actors, directors, scenes, and soundtracks, to interesting facts about more obscure titles.

The game will also feature collaboration with National CineMedia’s Noovie. NCM’s Noovie pre-show gives movie audiences a reason to arrive at the theatre early to discover what’s next in entertainment, with exclusive movie content, in-theatre gaming, and engaging brand advertising. The Noovie experience also goes beyond the big screen with a suite of digital products that make the magic of the movies mobile for moviegoers anytime, anywhere.

“Film is such a passion point among our HQ players and a movie themed trivia game has been highly requested by our HQ fans,” said Rus Yusupov, CEO of HQ Trivia. “Partnering with National CineMedia and Tribeca, we are excited to create a new space that allows families to reconnect around movies.”

“Movie trivia is always a huge hit with fans, and this is a great way for movie audiences to get excited about getting back to the big screen this summer,” said Jerry Canning, vice president, digital ad sales with National CineMedia. “We’re looking forward to working with top brands like Tribeca to sponsor the new HQ Movie Trivia Night and to help them connect with this valuable and highly-engaged movie-loving audience on a new digital platform.”

"Tribeca’s legacy is rooted in bringing people together around film in new and innovative ways,” said Jane Rosenthal, co-founder and CEO of Tribeca Enterprises and Tribeca Film Festival.

“We’re thrilled to partner with HQ as they unite film fans across America through live trivia and interactive entertainment."

The premiere episode of HQ Movie Trivia Night was in honor of the SAG-AFTRA foundation, a nonprofit organization dedicated to providing resources to members of the Screen Actors Guild and the American Federation of Television and Radio Artists members. The foundation received a $5,000 donation. The program was hosted by HQ fan favorite Anna Roisman.