Unified Pictures to Distribute The Rendezvous in the US 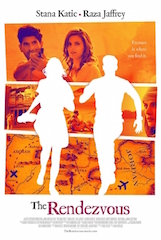 Directed by Amin Matalqa (the Sundance Film Festival award-winning Captain Abu Raed) and shot in the Kingdom of Jordan, The Rendezvous is a classic romantic action/adventure centering on a Jewish doctor (Katic) and a Muslim State Department employee (Jaffrey) who unwittingly become involved in a 3000-year-old mystery that could change the future of the world.

Highland Film Group, which is handling worldwide rights, has already bolstered strong sales across many major markets in Europe, the Middle East and Asia. Tricia Gibbs and Dan Halsted produced the Rendezvous under the Halsted Pictures banner. Terrel Seltzer wrote the screenplay, which is based on the novel by Sarah Isaias.