Qube Cinema has been licensed to support Auro 11.1 by Barco playback in its flagship XP-D and XP-I digital cinema servers.

Cinemeccanica and IMG Cinemas Multiplex have introduced what the companies are calling the first immersive cinema in the world. Located in Venezia Mestre, Italy, the theatre opened last week.

More than fifty screens in the Asia Pacific Region have been equipped with Barco’s Auro 11.1 audio platform, the company has reported. In the next twelve months, five additional Asian based mixing studios are upgrading their equipment to the Auro-3D Studio System and ten Asian feature films, including No. 1, Race Gurram, Vishwaroopam 2, and Kochadiyaan, will be released in Auro 11.1 by Barco. In addition, Barco partner MBS Studios in Hong Kong and H. Brother in China will be releasing a slate of regional titles.

Qube Cinema has been licensed to support Dolby Atmos playback in its servers. The Qube XP-D and XP-I digital cinema servers are the first in the Qube server line to be evaluated to support Dolby Atmos playback with software updates expected to be available in early 2014. Dolby Atmos unleashes the potential of sound in storytelling by giving filmmakers the ability to precisely place or move sounds anywhere in the movie theatre, even overhead, to create the most engaging cinematic experience ever. 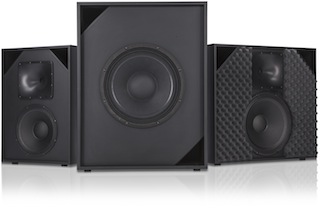 Golden Screen Cinemas, the leading multiplex operator in Malaysia, is the first to install the Dolby Atmos sound platform in Malaysia. The White Storm, directed by one of Hong Kong's most renowned film directors, Benny Chan, and starring prominent Hong Kong actors Louis Koo and Ching Wan Lau was the first Dolby Atmos film to be showcased at the theatre.

Peter Jackson’s The Hobbit: The Desolation of Smaug, a production of New Line Cinema and Metro-Goldwyn-Mayer Pictures, and the second installment in the Hobbit film trilogy, will hold its worldwide premiere at the Dolby Theatre in Dolby 3D and Dolby Atmos sound on Monday, December 2.