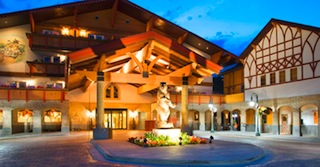 The seventh annual Arthouse Convergence conference takes place January 13-16 at the Zermatt Resort in Midway, Utah. The event is expected to draw nearly 400 arthouse theatre owners and managers to more than 25 sessions over the four days. Film critic Leonard Maltin is among the keynote speakers and the sessions will cover such topics as customer service, concessions, memberships and programming. I will be at the show and will have reports from there. To understand the current state of independent art house cinemas in the United States, a good place to start is downtown Ann Arbor, Michigan, where within a stone’s throw of each other sit the majestic Michigan Theatre and the smaller State Theatre. The theatres have something of a shared history, which only serves to highlight their differences. Despite their close proximity and their significant business ties, one theatre represents the potential that digital cinema technology can bring to a thriving cultural center while the other illustrates the many challenges that the transition presents to theatres that have yet to make the move. Russ Collins, executive director and CEO of the Michigan Theatre is involved with both ventures and, as the chairman of the trade group Art House Convergence has a solid perspective on the past, present and future state of the independent art house cinema.

The Michigan opened in 1928 and through the 1940s was a showplace for live concerts, theatre production, music, community events and movies, the same cultural mix it offers today. In the Fifties the Butterfield Theater Company modernized the theatre in a misguided attempt to compete with television. In 1979 with the advent of the multiplex Butterfield ceased operations and the Michigan’s future was uncertain. Community leaders banded together to save the theatre, worked to have its outstanding debt forgiven and in 1982 hired Collins and his team to manage the theatre and to oversee a massive fund-raising and restoration effort.

Built in 1942, the State Theater was the last commercial building to be completed in Ann Arbor after the start of World War II. The Art Deco cinema was designed strictly for movies and has a screen but no usable stage. In the early 1980s the George Kerasotes Corporation, owners at the time, quartered the theatre with two screens downstairs, two in the balcony but pulled out in 1987. The first floor was gutted and converted to commercial retail space. In 1997 a private investment group acquired the State Theatre and hired Collins and his team to manage the programming and marketing.

After more than thirty years at the Michigan Theatre, Collins has overseen dramatic change. When he took over, the building was in sad disrepair. With community support programming resumed and the painstaking renovation began. The theatre operated with 16mm, 35mm and 70mm film projectors, which it still has. Christie digital but not DCI-compliant projectors were added in 2005 to show programs on Blu-ray and other digital formats. 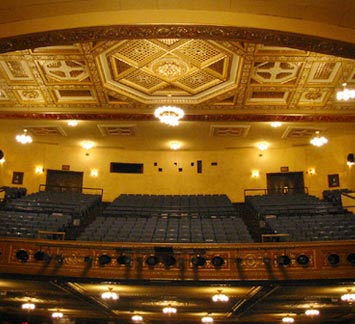 Eventually the historic 1,700-seat majestic theatre was returned to its full glory and Collins and his team supervised the addition of a 200-seat dedicated screening room. Recently Sony 4K DCI-compliant projectors were installed in both venues. Collins said the theatre paid cash outright for one projector and secured a loan from a local bank for the other.

While he doesn’t minimize the difficulties that many small exhibitors encounter when confronted with the need to convert to digital cinema Collins has a very matter-of-fact attitude about the situation. “It’s a significant change,” he said, “but it’s a technology change. With technology changes sometimes you get to choose, sometimes you don’t.” He compares this transition era to the earlier move from silent movies to sync sound. “Clearly [the transition to sound] created dislocation and upset,” he said, but just as “clearly it didn’t kill the film business. The film industry didn’t change.”

Collins said people in the business tend to romanticize earlier eras but the reality is that “showing movies has always been a hard business.” The earliest exhibitors were disparaged as low rent and the successful ones were the people who educated their audiences about the value of cinema. Collins said that the theatres that thrived in the silent era and “had a strong balance sheet” were able to survive the transition to sync sound. That pattern is being repeated in this era of transition from film to digital.

Asked about the future of the State Theatre he doesn’t offer too many details. “We do programming and marketing for them,” he said suggesting the decision is not his to make. The venue, which still operates with 35mm projection, would require significant restoration and does not have a strong balance sheet. Its future seems uncertain.

Collins concedes that his theatre benefits greatly from its location near the University of Michigan and there’s validity to the conventional wisdom that art house cinemas thrive in large cities and university towns. Nevertheless, a recent survey by the Art House Convergence suggests that small towns may offer the easiest path to success because they don’t face competition from commercial exhibitors. In that regard, Collins wishes that commercial cinemas didn’t feel so threatened by art house cinemas.

He said art house cinemas differ from the bigger theatre chains in being “community-based, mission-driven” cultural centers. Mainstream theatres are “commercial entertainment vehicles designed to make money.” Not that Collins is opposed to making money; he’s vigilant about maintaining a solid balance sheet for his operation but he strongly believes that art house theatres offer a value beyond commercial success.

Although he accepts the animosity that many if not most commercial exhibitors have for art house theatres he strongly believes it’s misplaced. Even if in theory a ticket purchased at the Michigan Theatre takes money away from the local multiplex, the reality he suggests is more subtle and complicated. Art house theatres, especially in university towns, teach people about movies as an art form. Once they develop a deeper appreciation for the art of cinema, they invariably become better and more loyal fans of all kinds of movies. “Art houses actually create audiences for cinema,” Collins argued. “In the long run art houses are not going to take business away from multiplex theatres.” 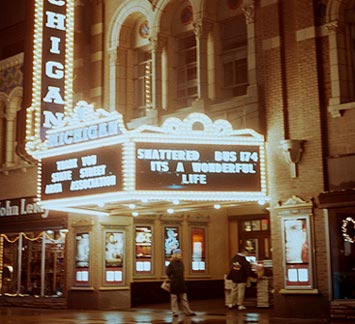 In many respects the Art House Convergence was born of that “community-based, mission-driven” spirit that Collins often recites in conversation. As part of its 25th anniversary celebration in 2006 the Sundance invited 24 people, including Collins, from 12 independent theatres across the country to its annual January film festival in Park City, Utah. The event was dubbed “The Art House Project” and was designed to thank the participants for their longstanding support on independent films.

“We shared a meal and discussed our common experiences as theatre owners and managers,” Collins said, and after the festival “we stayed in touch.” The group returned to Sundance the following year and by 2008 had grown to 25 people. They formalized their gathering as the Art House Convergence, named officers including Collins as chairman and found sponsors. Art House Convergence 2013, held this past January, attracted 350 delegates and has become, Collins said, “The largest gathering of art house theatres in North America.”

Asked how many art house theatres there are in the country he said, “We’ve tried to figure that out” and based on a recent initial survey he said the number in the United States is “more than 500 and probably close to 2,000.” One of the reasons for the wide range is that the number depends on how you define an art house cinema. It’s smaller if you only include movie houses like the Michigan Theatre but much larger if you include the growing number of museums that program independent films, documentaries and alternative content and an also growing number of upscale senior centers that run sophisticated programs of classic films and alternative content.

“I think most art houses will survive,” Collins said. “Especially those that are true to being a community-based mission driven cultural center.”