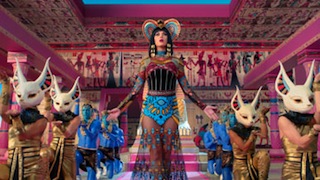 Katy Perry's latest music video for the hip hop-infused hit single Dark Horse is a bold, Egyptian-themed cinematic epic created by storytelling studio Mirada. Starring Katy-Pätra, the video is a larger-than-life tale that follows the legendary Queen of Memphis as a parade of would-be suitors vies for her heart.

Beyond the traditional size and scope of a music video, Dark Horse rivals the grand-scale of a major motion picture with reimagined Egyptian motifs that build a mythical landscape defined by stylistic juxtapositions that mirror the track’s fluid mix of sexy vocals. While much of the action was captured in-camera on stage during a rapid two-day shoot, Mirada pushed the video’s aesthetic to new heights with intricate 3D character assets, FX particle and fluid simulations and visual enhancements to key moments within big live-action sets and sprawling digital matte-paintings.

“Mirada has delivered on many levels for our recording artists, especially with Katy Perry. I’m consistently impressed by the creativity and commitment their artists display with each new project,” said Lockwood. “Mathew Cullen and Mirada took Dark Horse to another level and helped create a stunning visual world which is distinctly Katy and very entertaining.”

From creating giant Egyptian pyramids and architecture, building and animating a talking sphinx, to recreating the exotic Nile River, integrating elaborate matte paintings, and turning men into dust, the team of gifted Mirada artists yielded all the incredible visuals in just eleven days. As Ashton put it, “The project was an adventure in the truest sense of the word. We had an excellent team that embraced the story and pulled together to make a very big, unique film in a very short period of time. A perfect storm indeed.”

The Dark Horse video marks Mirada’s third collaboration with the pop superstar, having also created the videos for the jungle-themed Roar and the candy-coated California Gurls. Though a massive undertaking, Mirada built on the creative shorthand developed over previous collaborations with Perry to achieve the project’s ambitious-and-epic scale. Dark Horse is the third single off Perry’s Prism album and her ninth US number one hit.