11 Dollar Bill has been shortlisted for an Association of Independent Commercial Producers Post Award for its contribution to a spot for the Colorado Lottery offering a hilarious homage to the Rocky Mountain spirit. Welcome to Winning Country, a contender in the awards show’s regional category, was conceived by the Denver agency Cactus. 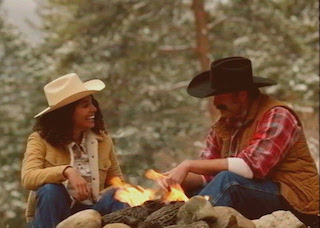 Promoting the game Lotto+ the spot is made to look like a beer commercial from the 70s with smiling cowboys and cowgirls, snow-swept mountains, and icy streams, set to a kitschy country music anthem.

Wayde Samuel edited the spot, giving it a bouncy rhythm and adding scratches and other effects to make appear to be a piece of vintage advertising. “It was a great concept, it was beautifully shot in the mountains and the song was fantastic,” Samuel says. “That made it a lot of fun.”

The worn and faded look of the spot was further enhanced through color grading, performed by 11 Dollar Bill’s Clark Jackson.  “We added several layers of film grain and textures,” Samuel recalls. “We also desaturated to make it look old and roughed up.”

Winners in the 2022 AICP Post Awards will be announced June 9.