The Göteborg Film Festival's ninth Nostradamus Report, Imagining a Sustainable Industry, was presented at the Marché du Film in Cannes. The annual report looks into the near future of the audiovisual industries through research and interviews with industry experts. 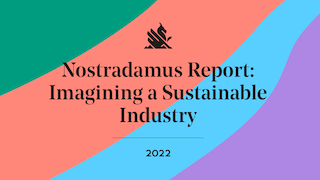 The report considers such questions as how can we build a long-term sustainable industry, taking into consideration financial, social as well as environmental perspectives? And how do we create qualitative content that is relevant for broad audiences while also guaranteeing durable artistic and independent structures? And what would it take to get there?

This year’s Nostradamus Report paints a picture of the current industry landscape and its challenges, outlining a set of directions on where the industry could be heading, as an industry but also as a society.

The 2022 report has a particular spotlight on Europe. As the global streaming giants are settling their positions, the unprecedented growth in production and capital has strongly challenged the European models across the board. The future role of public audiovisual investments and the independence of the European sector is under development, while also facing an increased volatility in the global economy and a geopolitical crisis in Europe.

The report also highlights the urgent issue of industry health and discusses how transforming working conditions across the industry should offer financial, artistic, and efficiency benefits directly.

"Our track record has always been surprisingly good, but in this ninth year of the report, the uncertain political and economic situations have finally made firm predictions impossible,” said Johanna Koljonen, author of the Nostradamus Report. “Instead, the report identifies tensions and pivot points where the outcomes will be determined in the next few years through choices made by stakeholders all across the value chain. We all have an opportunity now to truly affect which future we want for the industry."

The Nostradamus Project aims to monitor, predict and analyze the future of the screen industries. It is founded and run by Göteborg Film Festival with support from and in collaboration with lead partner Film i Väst and with additional support from Nordisk Film & TV Fond, Region Västra Götaland, Kulturakademin and Creative Europe/MEDIA.