Social cinema platform Kinema today announces its launch of a new fully integrated and secure live video broadcasting tool into its virtual Kinema cinematic experience. This combines high-quality, live streaming technology with an advanced film play experience and easy-to-navigate controls. This proprietary feature, an entertainment industry first, gives screening hosts, exhibition partners, filmmakers and talent access to a single source of seamless and easy-to-use tools, enabling them to engage with their audience during live Q&As and film screenings hosted on the Kinema platform. 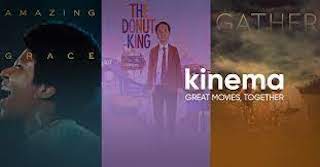 Through its Virtual Kinema screening technology, hosts and independent movie exhibitors can easily invite talent, celebrities, and special guests from all over the world to lead meaningful discussions and engage with their audience (community) in real-time; all on the Kinema platform. The improved, integrated platform makes it easier for Kinema’s growing network of screening hosts, which include nonprofits, businesses, educational institutions, libraries, activists, and influencers, to select from a library of top films, organize in-person, virtual and hybrid screenings, and related discussions for an unlimited number of audience members. In addition, the Kinema platform provides built-in ticketing, real-time user management and data analytics.

Kinema will begin deploying its new enhanced platform for all screenings, including their weekly Movie Monday events, which include The Big Scary ‘S’ Word, The Ants & The Grasshopper and more.

“We’ve purposely built this new technology in response to the great feedback we’re hearing from the hosts and filmmakers who are relying on Kinema to provide a unique cinematic and communal screening experience,” said Sejal Hingrajia, head of product ops, Kinema.

Kinema CTO and head of engineering Tim Knight said, “We looked to the market to see what tools were being offered to filmmakers and hosts and saw an opportunity to build something to fill that gap.”

The Kinema platform supports both in-person and virtual screenings with optimal controls for both the film licensor and the screening hosts. In advance of launching on Kinema, the content licensors (typically filmmakers or distributors) set their licensing tiers, ticket pricing, and geographic territories where the film is available. Hosts can select their film of choice, invite audiences and speakers, manage rsvps / box office, and gather their community for live chat and video discussions all within the Kinema platform. The new Live Video Broadcasting tool enhances the original Virtual Kinema screening technology by adding another layer of live engagement between the hosts, speakers, and the community.

“At Kinema, we are always listening to our users and using their feedback as we look to innovate the future of cinema,” says Christie Marchese, founder and CEO, Kinema. “Its power and reach is substantial and, if harnessed correctly, social cinema has the potential to evolve entertainment consumption in a way that ensures story makers everywhere get to reach, and impact, their intended audiences.”