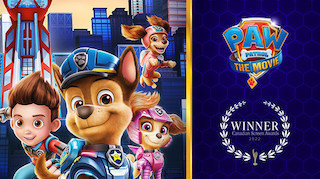 The Golden Screen Award recognizes the Canadian film that grossed the highest domestic box office over the time period of January 1, 202, to February 24, 2022. The first feature film for Spin Master Entertainment, in association with Nickelodeon Movies and distributed by Elevation Pictures in Canada (Paramount Pictures in rest of world), PAW Patrol: The Movie grossed more than $7.5 million in Canadian box office sales and $152 million to date globally.

Now in its ninth year, preschoolers in over 190 countries have gone on countless adventures in over 30 languages with the PAW Patrol pups – all produced in Canada. PAW Patrol: The Movie stayed true to these roots with more than 90 percent of the production being completed in Canada. The movie was directed by Canadian animation veteran Cal Bunker; written by Bunker and his writing partner Bob Barlen, animated by Montreal based Mikros Studio and brought to life with Canadian voice actors from the original series. As a nod to its heritage, the opening scene involves Chase rescuing truck driver Gus from a conundrum while transporting maple syrup.

"When setting out to tell a deeper PAW Patrol story we were passionate about working with the best Canadian talent to create our first theatrical," said Jennifer Dodge, Spin Master's president of entertainment. "Winning the Golden Screen Award is a powerful tribute to the exceptional team of Canadian writers, voice actors, animators and producers who worked tirelessly to bring PAW Patrol: The Movie to the big screen. Thanks to the Academy for this recognition and to all the kids and families, who enjoyed this film, here in Canada and abroad."

PAW Patrol continues to be on a roll with a second feature film, PAW Patrol: The Mighty Movie, greenlit for an exclusive theatrical release, distributed by Elevation Pictures in Canada, on October 13, 2023. A new PAW Patrol television series spin-off for Rubble, one of the main pups, is also set to debut in the same year.