The Chinese technology company Snoppa has released Rover, a cinema dolly with an electronic stabilization system. Rover is essentially a shooting robot that removes obstacles that the ground creates. It can carry heavy and bulky professional cameras, move stably on a variety of bumpy surfaces, and has programmable automation function. For film crews, it can significantly reduce labor costs and improve work efficiency by introducing a new type mobile shooting equipment to the filming environment. 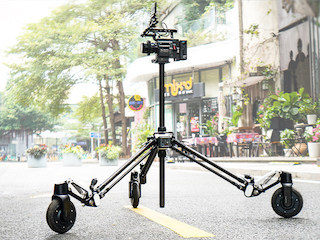 The Snoppa Rover is equipped with a unique electronic active damping system that can eliminate vibrations caused by road bumps and obstacles during movement. Rover can also eliminate speed mutation caused by road obstacles and keep forward motion at a constant speed. The company says this gives Rover a wider range of terrain adaptability.

Rover has a load capacity of up to 15 kilograms (33 pounds) and can carry cameras ranging from mirrorless and DSLRs to cinema cameras. With the built-in Wi-Fi module, wireless image transmission module, and camera control module, the operator can use a tablet to remotely control both Rover's movement and camera shooting.

Users can program a preset path through the dedicated app to let Rover automatically move according to the preset path and shooting angles. The company says this can greatly improve the efficiency of film work and reduce the burden of videographers. Preset or recently used paths can be saved as templates, which can be reused repeatedly so that the videographer can easily take repeated shots with precise accuracy.

Other features include hyper-lapse, auto tracking, high-speed follow shooting, and others are all very practical functions the lend assistance in the cinema and film environment.

Rover is being pre-sold on the Kickstarter crowdfunding platform which is currently offering an early bird price of $2399 https://www.kickstarter.com/projects/atom2/snoppa-rover-electric-stabilization-cinema-dolly?ref=5groz3. It is expected to be shipped around July this year.