Alcons Audio Goes for the Gold 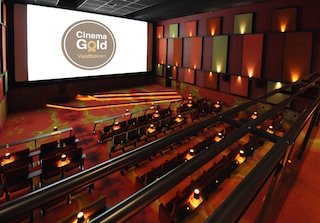 While large multiplex cinema chains compete on quantity, smaller independent venues are finding a new market by specializing in quality. An example is RSB Cinemas, a Dutch company that has recently opened its second venue where cinemagoers can enjoy a new level of quality and personal service. Located in Veldhoven, just a few kilometres from the centre of Eindhoven, each of the new-build Cinema Gold’s four rooms features large, comfortable chairs with tables, at-seat luxury snacks and drinks, ordered via each seat’s service button at any time, and spectacular quality movies, thanks to Alcons pro-ribbon 7.1 channel surround sound systems and Barco Flagship laser cinema projectors.

“We are all about giving our guests a quality experience with the personal touch,” says Joop Hamers, RSB Cinemas senior marketing manager. “Both of our new venues – Cinema Gold and Cinema Roma in Wijchen – are smaller than the multiplex chains, but we still offer very commercial programming.”

Alcons C-series pro-ribbon systems range from the ultra-compact CR1 up to the large format CR4 and scalable Cinemarray systems. Complemented by a range of surround and subwoofer units, the C-series ensures that - whatever the space and sound reproduction demands - audiences enjoy unrivalled quality cinema sound.

“It was very important for us to offer an identical quality experience in each room,” says Hamers. “Guests just want to see their chosen movie, they don't want to have to think about whether it will sound better in one room or another. All of our rooms sound equally as good as all the others.”

He continues, “We decided to use Alcons after doing listening tests at a cinema with a different audio setup in each of its screening rooms. We really heard the difference in the room that had an Alcons system. When turning up the volume, Alcons stays really clear and it doesn’t hurt your ears.

“We have found that one of the main complaints from cinemagoers is that they claim the audio is too loud. When Alcons systems are run at the same SPLs as conventional systems, there are almost no complaints. We experienced that difference ourselves at Hilversum, which convinced us that Alcons was the ideal system for our new, high quality venues.”

Cinema Gold has already proved so popular that, within two weeks of opening, it welcomed its 10,000th guest and, after less than three months, had catered to more than 30,000.

“We have been very pleased with the success of Cinema Gold and have had a lot of compliments about both the sound and picture quality,” says Hamers. “The combination of an Alcons audio system and Barco flagship laser projection in each room means guests enjoy a uniformly excellent movie experience.”

Indeed RSB Cinemas is so impressed with Alcons technology that it is even mentioned on Cinema Gold’s customer-facing web site, saying, “Our speakers are equipped with pro-ribbon drivers, meaning the sound is never harsh, but clear and compelling.”