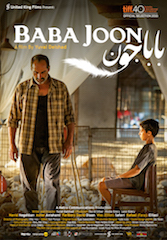 Working on numerous high-profile and award-winning projects again this year, Edit Studios invested in a Mistika system and Mistika Assist Station to host its digital intermediate theatre with 2K real-time resolution and 4K rendering of documentary and feature film projects just over a year ago. Edit Studios selected the Mistika system for its flexibility and ease with which it can be integrated into the facility’s file-based workflow.

Edit Studios' chief grader/colorist Yoav Raz said, “Mistika artist Alvaro Barrasa, who did most of the grading in the movie, had an array of amazing techniques to skilfully handle the noise that the camera produced in some of the shots. I was working on the Mistika Assist station at the same time that he worked on the main Mistika system here, and he would create duplicates for me to then de-noise. I was amazed with the capabilities of Mistika's optical flow de-noise effects and with its ability to create Alpha on some parts of the image, and then be able to de-noise only those sections, and to also then be able use some of the paint effects to isolate the de-noise from other areas of the image. The Mistika system’s ability to re-conform those shots back to Alvaro's main timeline so quickly and efficiently impressed me.”

Mistika colorist Alvaro Barrasa said, “The images came beautifully filmed. We wanted to give different looks depending on the various moods of the characters while always being aware of the Mid-East climate, at the same time. The light in that area of the world is usually quite bright and flat so it requires a bit of creativity, especially with regards to the wide panoramic shots. The idea was to get as much depth and richness on each frame as possible.”

Barrasa added, “Although Baba Joon was filmed using Red Epic, which provides great texture on the image, it tends to also generate some noise when you strongly treat the image, especially in the darker areas. Fortunately, Mistika enables you to easily create your own compositions and make what other systems simply can't achieve. Mistika allowed us to produce a stunning filmic look to the picture and control everything, including the DCP, right up until the screening.”

Technical director and post-production supervisor at Edit Studios Amit Gilboa said, “Baba Joon was one of our first projects using Mistika, yet the integration was amazingly fast. Working with the director on his debut film, just realizing the options in his possession, we were able to re-conform Alvaro's very complex stacks numerous times to new cuts and versions without losing a beat. This project really taught us a great deal on how to organize and structure our projects.”

Founder of Edit Studios Sasha Franklin said, “Well done, especially to Alvaro and also to Yoav who both used the Mistika system on the Baba Joon project. We were thrilled with the results and for another all round successful year at Edit Studios. Having the Mistika technology on board, we can reflect back on a productive year in 2015 and look forward to this new year of adventures ahead, which will be just as exciting, if not more so, with Mistika at our studios.”

SGO's regional sales manager, Jose Luis Acha said, “On behalf of myself and the team at SGO, we congratulate Edit Studios on a highly successful 2015. We are very proud of them and their incredible achievements. We look forward to seeing what else is up their creative sleeve for this new year ahead using Mistika. They are an amazing team, reaping well-deserved awards along the way.”

Baba Joon was also screened at the Toronto International Film Festival 2015. The film was produced with the support of The Rabinovich Foundation for the Arts-Cinema Project with the participation of the Leon Recanati Foundation, Gesher Multicultural Film Fund, Cultural administration Israel ministry of culture and sport, The Israel film council, Y&S Nazarian Family Foundation and Ima Foundation, Israel Fund for Film Production and United King Films.