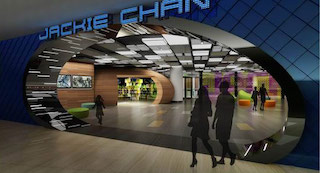 Arts Alliance Media has signed a deal with China’s Jackie Chan Cinema chain to deploy AAM’s Screenwriter Theatre Management System across more than 200 screens. The deal was concluded in conjunction with Beijing CServ, a professional IT and cinema TMS provider and one of AAM’s Chinese reseller partners.

Jackie Chan Cinema is one of China’s fastest growing cinema chains. Founded by the Hong Kong martial arts actor and director Jackie Chan along with the Sparkle Roll Group Limited, one of China’s largest luxury product retailers, the chain currently has 213 screens across the country.

Screenwriter, the world’s most popular Theatre Management System (TMS) is installed on more than 25,000 cinema screens around the world, and manages all screens, content and playlists in a site. Users can see exactly what’s happening on all screens in real time from one interface, and even from a mobile device. Screenwriter automates many time-consuming and error-prone processes, saving time and reducing the possibility of mistakes leading to missed shows. Playlists can be built, moved or repeated at the touch of a button, with content transferred automatically and schedules synchronised with the cinema’s POS system. Screenwriter also proactively alerts users to any upcoming problems, such as missing content or KDMs, in time to fix them and avoid losing shows.

Eric Stevens, Commercial Director of Arts Alliance Media added, “Jackie Chan Cinemas are a really pioneering group and so we’re very happy to be announcing this partnership with them. Screenwriter, with its automation capabilities and new features such as a mobile app, will help Jackie Chan monitor and manage everything that’s happening on their screens while saving time that can be spent on improving the customer experience even further.”

AAM will work with CServ in China to manage the deployment of the software to Jackie Chan screens, upgrading each screen from its existing TMS to Screenwriter.