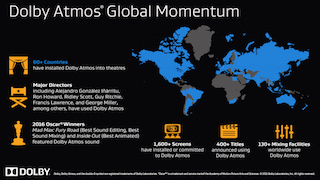 Movie theatres are getting bigger and exhibitors have learned that audiences are willing to pay for the kind of immersive entertainment that simply can’t be duplicated in the typical home theatre. This trend has only increased the demand that the audio match, or even surpass the quality of the images on the big screen. Cinema sound has never been bigger or more important. Understanding that, Digital Cinema Report reached out to key manufacturers to learn what developments in sound technology they’ll be highlighting when the exhibition industry gathers next month at CinemaCon 2016 in Las Vegas. In part one of this ongoing series, I spoke via email with Jed Harmsen, senior director, cinema products, Dolby Laboratories to get his perspective.

Jed Harmsen: Dolby offers a lineup of cinema audio processors, digital-to-analog converters and, coming soon, power amplifiers to the cinema market in support of playback from Dolby Surround 5.1 to its Dolby Atmos immersive audio experience. Our Dolby Atmos Cinema Processor CP850 product line offers exhibitors a choice of advanced digital cinema audio solutions. The CP850 Base will play back traditional Dolby Surround 7.1 and 5.1 formats, as well as render select Dolby Atmos titles to a Dolby Surround 7.1 configuration. Our full Dolby Atmos Cinema Processor CP850 builds upon the base offering by including rendering support for a full Dolby Atmos experience, which is scalable and the only solution that despite variations in the size, shape, and speaker configuration of each theatre ensures that the artist’s intent remains intact, from the studio in which it was mixed to the cinema.

DCR: What are you highlighting at CinemaCon 2016?

JH: At CinemaCon 2016 Dolby will highlight a full range of integrated, end-to-end audio, imaging, accessibility and postproduction solutions for the cinema industry.

With more than 1,600 Dolby Atmos screens installed or committed spanning over 60 countries, more than 130 mix facilities worldwide, and 400 titles announced with support from all major Hollywood studios and countless international distributors, Dolby will be highlighting the global success of Dolby Atmos and new, affordable, and innovative ways exhibitors can look to bring Dolby Atmos to additional screens in their complex. 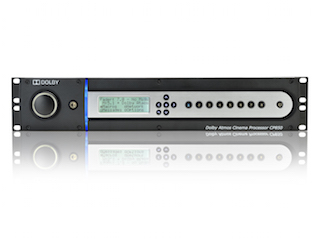 Dolby will also be showcasing the Dolby Integrated Media Server IMS2000, which is the next-generation offering in Dolby’s Integrated Media Server line of products. The Dolby IMS2000 is a single-board solution that provides high uptime to keep the show running and protect revenue streams. The Dolby IMS2000 offers cost-effective reliability based on a server platform proven on over 90,000 screens worldwide, plus the flexibility you need for today’s cinemas.

Last, but certainly not least, Dolby will be highlighting its award winning Dolby Cinema offering which is supported by all the major Hollywood studios. In just over a year, more than 200 Dolby Cinema sites have been installed or committed across the globe, with 24 titles released or announced

DCR: In your view, what have been the biggest changes in cinema audio in the past decade?

JH: Our introduction of an object-based approach to creating, rendering, and playing back cinema audio marked a giant step forward in the evolution of cinema audio, an evolution that took us from mono to stereo to multichannel surround and now, to object-based audio in the form of Dolby Atmos. The creative community loves using Dolby Atmos because object-based audio lets them be much more inventive when using sound to draw an audience into a story. This isn’t just about adding height, but about adding the precision of movement.

DCR: Do exhibitors in general appreciate the value of audio in movie theatres? Do their patrons?

JH: Yes, in fact after three years of deploying Dolby Atmos to exhibitors around the world we are starting to see a desire to outfit entire complexes with Dolby Atmos beyond the largest auditoriums. Many exhibitors around the globe are moving to this trend in bringing a premium sound experience to every auditorium in the complex because their patrons are noticing the difference. Exhibitors sites including United Cinemas (Melbourne, Australia), PVR ICON Cinemas (Andheri, India), DT Cinemas (Noida, India), Suncity Cinema (Mumbai, India), Shanghai Duo Yun Xuan Dolby Atmos Cinema (Shanghai, China), and the sky cinema (Hong Kong) among others around the globe have done full complex implementations (IMAX screens not included) and we have also seen many sites add additional Dolby Atmos play down screens to their complexes.

Here are some quotes from exhibitors:

“United Cinemas, the first exhibitor in down under to install Dolby Atmos at all 8 screens in one location aims to take the Australian cinematic experience to the next level. A supportive and reliable technology partner like no other, we look forward to working with Dolby in our upcoming expansion plan,” said Roy Mustaca, chairman, United Cinemas (Dolby Atmos complex location: Craigieburn, Melbourne)

“At PVR, we believe in bringing the most revolutionary and state-of-the-art technologies to its patrons and deliver the highest-quality movie experience. Our collaboration with Dolby goes a long way. Dolby is amongst one of the most celebrated brands in the market for premium sound quality, and it perfectly fits with PVR’s mission to offer its audience the ultimate moviegoing experiences. I believe Dolby Atmos is indeed the best sound technology available in the market. For our brand, PVR, we want nothing but the best. We want to make movie watching a real-time experience for our patrons and with the premium sound technology that Dolby Atmos offers, we are very confident about the results,” said Ajay Bijli, chairman and managing director, PVR Ltd. (Dolby Atmos complex location: PVR ICON Cinemas, Andheri, India)

JH: From exit surveys conducted with patrons who have experienced Dolby Atmos we have heard many great responses like:  “The sound wrapped around the theatre and had the feeling of being at a live event,” “The sound was amazing; I could feel it in my chest,” “The true immersion you get with [Dolby] Atmos is unequaled,” and “Wow, what a great experience! Crazy good!”

We also receive many comments that convey the desire to bring movie viewing back to the cinema like, “I used to stay home and watch movies, but the sound was so awesome at the theatre that I may have to become a regular moviegoer again.”

It’s interesting to also note that in the US, of the nine cinema features we recently researched, “immersive movie sound” was among the top three selected features when consumers were asked to pick the most appealing. It’s clear to us that the quality of the aural experience is every bit as important and impactful as the quality of the visual experience. When we’re able to enlighten patrons on a superlative audio experience it’s clear that they notice a difference.

DCR: Are cinema audio standards necessary to advance the cause of better quality audio in movie theatres?

JH: Dolby supports efforts to develop object-based audio standards and is active in SMPTE and other standards bodies to ensure the industry standardizes on technologies that are proven to work in the real world, and are sensibly scalable. In addition, they need to provide better, more compelling and differentiated experience to draw movie audiences to the cinema; and ensure that filmmakers’ creative vision – their original intent – is presented as completely as possible without getting distorted or lost along the way.