The Color of Emotions 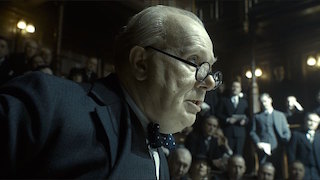 Screen actors convey emotion in several ways: their voices, their eyes and the subtle color changes of their facial skin. But what if – as in the case of Gary Oldman’s Oscar-winning performance in Darkest Hour – much of their face is covered in silicone? That was one of the key questions Peter Doyle, supervising colorist at Technicolor, addressed when he collaborated on the film’s palette.

Doyle is one of film industry’s most distinguished supervising digital colorists, having handled digital color grading on two of the industry’s largest franchises in movie history, The Lord of the Rings trilogy; and the last six Harry Potter films. He has also color-graded eight of the 30 highest-grossing films of all time.

Over the last decade, Doyle has focused exclusively on digital grading for feature films. A strong advocate that color design and grading should be integrated into the production creative process, Doyle developed a pipeline that centralizes color-management of a film from dailies, including color control of VFX plates, through to final release printing, digital intermediates and video deliverables.

I recently met Doyle at a small coffee shop around the corner from Dolby’s New York headquarters in midtown Manhattan. We were joined by Stuart Bowling, senior worldwide technology marketing manager for Dolby Cinema a couple hours before a press screening of Darkest Hour.

As has been widely reported, Darkest Hour was Oldman’s passion project and he has said that he wouldn’t commit to the role of Winston Churchill unless he could convince the talented artist Kazuhiro Tsuji to come out of retirement to do the makeup. We all now know that he succeeded and that Tsuji went on to win the Oscar for best makeup and hair styling.

Once Tsuji was onboard, work on the film began in earnest. Doyle had previously worked with cinematographer Bruno Delbonnel on many films including Harry Potter and the Half-Blood Prince. He said having that relationship smoothed the process as they began to discuss the look of the film.

Both men were involved early in pre-production, even before a final script had been approved. The color palette was developed simultaneously with the initial makeup tests. They also agreed that the film would be shot digitally in high dynamic range. The film was released in Dolby Vision.

As Doyle told IndieWar, “The advent of laser projection in theaters with extreme high-contrast ratios has proven to be another great advantage. “It’s actually bringing an aesthetic back quite similar to the 70mm prints that were made many years ago. Except the advantage now is that you’re able to see greater sharpness, a lack of flicker, and a kind of purity in color. So, as the display medium is quite neutral, this allows you to design your look, knowing that it will be transferred and projected with an accuracy that hasn’t really been possible with film.”

Doyle said anytime you approach making a film that’s set in the past, the issue of shooting in black and white is discussed. It was quickly dismissed for Darkest Hour. Black and white movies can automatically suggest you’re watching history. The Darkest Hour creative team wanted to convey the sense that you are with Churchill in the ‘40s when history was actually being made.

Conversations about color can be ephemeral and said the fact that he and Delbonnel have a longstanding relationship was invaluable because “to communicate you need a common language.”

Doyle said it was extremely helpful that Oldman is a gifted amateur photographer and was “passionate about how the images would look.” It also helped that all three men share a passion for and collect color photography of the ‘40s and ‘60s.

Color photography was a novelty in the early ‘40s but the following two decades were a period of experimentation and innovation. The end result was that, by the late ‘60s, color in both still and motion picture photography became mainstream. Starting in 1939 and running through 1965, the Academy awarded separate Oscars for cinematography in color and black and white films. In 1939 Gregg Toland won the black and white prize for Wuthering Heights; Ernest Haller and Ray Renahhan shared the color prize for Gone with the Wind. The last dual awards were made in 1965 when Ernest Lazlo won the black and white prize for Ship of Fools and Freddie Young won the color prize for Doctor Zhivago. 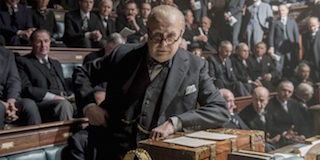 In the end, the Darkest Hours color pipeline was developed to mimic the color carbon process, an early precursor of 3-strip Technicolor. Doyle and Delbonnel created the look up table together and Delbonnel lit the film according to that LUT.

When supervising a color grading Doyle said his overall goal is to reinforce the narrative in any way he can. But, said Doyle, “the most important thing in any movie is skin tones. Skin tones can vary from age, class, health, emotion, a wide range of factors. When a person conveys anger, for example, their skin changes.”

Since Oldman was wearing a prosthetic device Doyle had to create those skin tones to reflect what the actor was portraying. Based on the performance, those tones needed to be lighter or darker. As an example, Doyle said, Churchill’s speech at the end is filled with anger and, as such, his skin would normally be flushed with blood. All of that had to be subtly created in post.

Doyle seemed especially pleased with the scene in Darkest Hour when the king comes to Churchill’s home for a conversation. The two men meet in a dark, dingy attic. Doyle said the scene was lit entirely with the single light bulb that is visible in many of the shots.

Early in his career Doyle ran a company in Austria that produced classical music. He believes color and music have much in common. “There is a natural affinity between a musical performance and a visual performance,” he said. “Both communicate a language and I find that very satisfying.”