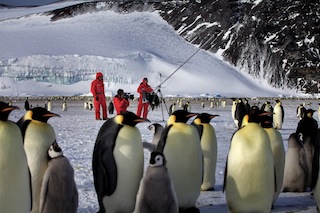 The mainland is a white desert of snow, surrounded by a clashing cold ocean, and scarcely populated. Only the animals and few plants are accustomed to the difficult living conditions. This is the Antarctic. DP Alessandro Beltrame from Italy left his warm southern European homeland for two documentaries for The Antarctica Project, a cooperative project of the Italian government and the private broadcaster Mediaset.

With scientists of the national research centers CNR, ENEA, and PNRA and armed with a full complement of gear including a Sachtler FSB 6/2 D tripod system he spent a month at the South Pole – with merciless temperatures dropping to 58º F (-50° C), a real test for the crew and the equipment.

The native penguins and seals are optimally adapted to the hostile living conditions with a thick layer of fat and dense fur or feathers and can move quickly over ice and under water. For human feet, this is more difficult, especially when it is also necessary to carry heavy equipment.

"Transport over icy, snowy, and rocky terrain is very difficult; that's why the equipment has to be extremely robust and very lightweight at the same time. The less weight, the better," says Beltrame when explaining the challenges of filming at the South Pole.

During shooting, temperatures between -40 to -58 ºF (40 to 50 °C below zero) were the norm. And this is what the fluid heads of the Sachtler FSB series were made for! Its metal casing makes the FSB 6 particularly resistant and robust. Even the damping mechanism with three horizontal and three vertical grades of drag +0 remains unfazed by the extreme temperatures. Together with the ENG 75/2 D tripod, the fluid head weighs in at only 11.7 lbs (5.3 kg), which makes it easy to transport through rough terrain. With a transport length of 33.1 in (84 cm), the compact tripod system can be comfortably carried on the shoulder.

Beltrame is not only on the go for projects commissioned by public and private Italian broadcasters; he also works for the BBC and the National Geographic Channel. Every shoot is an individual challenge – and this is exactly what the Italian cinematographer finds so appealing, "I like the adventure and extreme productions,” he says. “Underwater, windy mountain tops and caves – these are my specialties."

Thanks to the side load camera plate with the Snap & Go mechanism, camera configurations can be prepared according to climate and project requirements and then be set on the fluid head from the side with a turn of the hand– even when you're wearing thick gloves like Beltrame at the South Pole.

During the Antarctic shoot, the extreme temperatures required frequent battery changes. For this reason, it was especially important to Beltrame that the counterbalance of the camera set-up worked quickly and simply. He found support in the especially long 120-mm sliding range of the camera plate and the 10-step counterbalance with Speedbalance technology for set-ups from 3.3 to 17.6 lbs (1.5 to 8 kg). With the step-shifting system, the settings can be reproduced exactly, and counterbalance is achieved instantly every time. This way, preparations for filming don't become a test of patience.

With more than 20 years of professional experience all over the world, Beltrame knows what counts when choosing his equipment for work, which takes him to the most remote and barren corners of the planet.

"The quality of pan and tilt movements is a basic requirement. It doesn't matter how well you prepare, you never know how much leeway you'll actually have,” he says. “That's exactly why you need the best possible camera support. Especially when, as in the Antarctic, contact to the outside world is only possible every 15 days – when a military airplane comes from New Zealand. The worst case scenario is that you have to do without a tripod system for more than two weeks.”