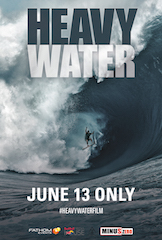 Fathom Events has entered into a multi-year master distribution agreement with global independent film distributor 1091, formerly known as The Orchard. Under the agreement, 1091 and Fathom will work to curate and distribute compelling content, including sports and action/adventure films, to cinemas across the United States.

1091 is global commercial distribution company for independent film and television content creators. The new company invests in technology, new delivery options and business intelligence that will offer superior levels of transparency for its clients.

In 2018, the two companies partnered to distribute the highly successful titles Andy Irons: Kissed By God, featuring three-time world champion surfer Andy Irons, and the acclaimed climbing documentary The Dawn Wall. The first title planned for distribution under this agreement will be Heavy Water, the big wave surfing documentary directed by Michael Oblowitz and produced by Red Bull Media House and All Edge entertainment.

“We are excited to team with 1091 to bring audiences the best in sports and action/adventure content. Our cinema network unites passionate enthusiasts for almost any content and 1091 has the ability to deliver what sporting fans want to see on the big screen,” said Fathom Events CEO Ray Nutt. “We look forward to continuing our successful partnership with the team at 1091.”

“This agreement provides us with a powerful distribution network to continue to bring exciting action sports content to the big screen,” said Danny Grant senior vice president, film and strategic partnerships at 1091. “The Fathom team excels at eventising, promoting and distributing our unique content to build the biggest audiences and create momentum for a strong downstream pipeline.”