Kicking Off with Kinky Boots 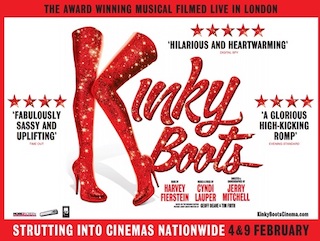 A new event cinema company – Art Screen Events – has been launched in Tasmania and its first presentation is the Tony, Grammy and Olivier Award-winning musical Kinky Boots, which will be screened later this month. Katrine Elliott, founder of Art Screen Events, is thrilled to be launching this exceptional theatrical event on the big screen in her old stomping ground of Tasmania’s North West Coast. With more than 23 years of experience in the film events industry, Elliott founded Art Screen Events to pursue her dream of sourcing and curating unique films and filmed events specifically for the Tasmanian audience.

“I feel that it is more important than ever that independent storytelling has a focus” says Elliott. “My goal is to present and nurture stories in a curated environment to ensure that each one has its own event and can tell its own story.”

In addition to her latest venture Elliott sits on the board of Independent Cinemas Australia and is a member of the Screen Tasmania Expert Advisory Group, a panel appointed to advise the Minister for the Arts and Screen Tasmania on projects eligible for Screen Tasmania’s funding programs. In 2020 she was an artistic peer panelist for the Tasmania Symphony Orchestra’s season.

Inspired by actual events, Kinky Boots is a huge-hearted hit that tells the story of two people with nothing in common – or so they think.

Charlie is a factory owner struggling to save his family business, and Lola is a fabulous entertainer with a wildly exciting idea. With a little compassion and a lot of understanding, this unlikely pair learn to embrace their differences to create a line of sturdy stilettos unlike any the world has ever seen. Ultimately, though, their most sensational achievement is their friendship.

There will be performances January 30-31 on the big screen at the Leven Theatre, Ulverstone. Patrons are invited to a champagne reception at 6:30 p.m. January 30 to celebrate the launch of Art Screen Events. A special matinee session screens at 2.00 p.m. on January 31.