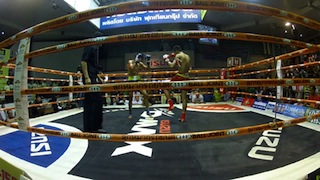 Al Caudullo’s documentary Muay Thai Madness is one of the first projects to be shot in 4K Ultra HD. The movie goes inside the Treasurers of Thailand – Mixed Martial Arts, which is the country’s centuries old national sport. Digital Cinema Report interviewed Caudullo via email about his documentary and, in particular, about his experience with 4K Ultra HD.

Digital Cinema Report: Describe Muay Thai Madness and how you got involved in the project?

Al Caudullo: Muay Thai is the ancient fighting art known as the Science of the Eight Limbs. Having lived in Thailand for the past twelve years I have witnessed, first hand, how engrained it is in the social fabric of the society here. Likewise, in that time Muay Thai has grown in prominence worldwide. Muay Thai gyms and, even Muay Thai as a fitness-weight loss training, have exploded over the last few years.

Muay Thai Madness examines that phenomenon as well delving into its roots and place in Thai culture and modern society. What drives foreigners from Brazil, England, Germany, Australia, the U.S., and China and over 40 countries around the world to flock to Thailand to learn from the Grand Masters? How do they fare against Thais who sometimes start training as young as 7 years old? Finally, we witness Thai and Western Females who are breaking age-old social taboos and becoming accomplished Muay Thai combatants.

DCR: Who funded the production?

AC: I have totally self-funded this project. The passion and the cooperation of the Grand Masters and gym owners, as well as the fighters also played a vital role. 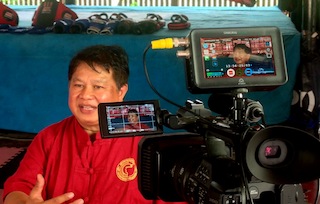 DCR: What was the budget range?

AC: I could easily say it was a shoestring budget, but I had to give up my shoestrings for flip-flops. In reality, with equipment and travel cost, less than $15,000.

DCR: What was the thought process that led to the decision to shoot this in 4K Ultra HD?

AC: As I am known as the 3DGuy, my original plan was to shoot this in 3D. I have some excellent fight footage already shot in this medium. But as 3D has gone into a lull and 4K UHD has come forward, I felt the project would be best served by this visually impressive new format. Being an independent filmmaker with an extremely limited budget I waited till I felt the right camera came along. I believe it did with the release of the Sony PXW-Z100. The combination of the ability to shoot 60P and do run and gun with such an affordable camera were major factors. Towards the end of the production the Panasonic GH4 came on the scene adding even more affordability pairing up with high quality and interchangeable lenses. This camera will be the primary tool in the follow up production, Lords of the Ring. The Panasonic GH4 is a real game changer for 4K UHD independent filmmakers.

DCR: Was this your first 4K Ultra HD production? If not, what was the first and what lessons learned there were helpful on Muay Thai Madness?

AC: This was not my first 4K UHD production. I broke into the 4K UHD world with a travel piece called Treasures of Thailand. Treasures was a 30 minute series of 4K UHD snapshots of beautiful and exotic locations around Thailand. Shooting it first gave me a chance to work with 4K UHD at a more leisurely pace and explore the intricacies of the new format. While much easier than 3D, 4K UHD has its own complexities and demands. Critical focus and proper exposure are but two of the demands of 4K UHD. They are both unremitting and merciless, giving no quarter for error. 4K UHD is more than just more pixels, it is increased dynamic range and a more robust color gamut. Attention to minute details in the frame are crucial to a successful shoot. In the end, Treasures provided me with a real world test of my 4K UHD systems as well as harkening me back to the old film days when a 500 foot mags would yield scant minutes of film. With the Sony PXW-Z100 and the Sony QXD 64GB memory cards, I was limited to only 13 minutes of 60p footage per card with a compression of 600Mbps. 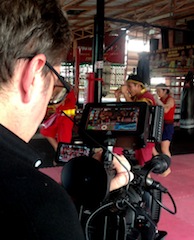 AC: My team was amazingly small. I half-jokingly tell people that my job title is chief cook and bottle washer. The team consisted of myself, my wife Bee, who not only was translator, interviewer, fixer and second camera. She is my muse and inspiration. With her, my amazing assistant, Remmy. She juggled managing the office, schedules, assistant camera as well as assistant editor. My good friend Phil Claffey was invaluable as second camera and interviewer on several key scenes.

I have to mention that Panasonic Thailand was amazing in their support. They not only provided me with access to the GH4, but also a Panasonic AX800 series 58-inches 4K UHD TV. They are even giving my trailers for Star of Thai Cooking and Muay Thai Madness, along with the full 30-minute episode of ‘Treasures of Thailand’ to each customer that purchases a Panasonic 4K UHD TV.

DCR: What cameras did you shoot with and how many did you use?

AC: My original camera was the Sony PXW-Z1000. Later I added the Panasonic Lumix GH4 with a 12-35mm and 35-100mm zoom lenses. On both cameras I utilized the Atomos Samurai Blade. Even though the Blade only records HD, the 325pixel/inch screen and focus and measurement tools were essential. 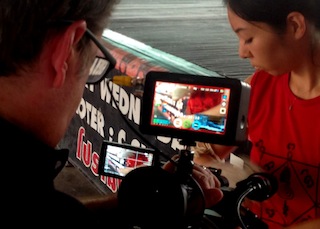 DCR: What lenses did you use?

DCR: How was this lit? All available light or did you have a lighting package?

AC: Most of the footage was shot with available light and generous use of reflectors for key areas. An on camera LED fill light was utilized for some close up shots. Occasionally, I would be able to use my cool light package consisting of a 6 tube and a 4 tube fluorescent kit.

DCR: How much footage did you acquire?

AC: This was probably the biggest challenge. The total footage spanned across 4- 3TB drives which had a dedicated twin set of drives for a total of 24GB of combined storage. The biggest challenge was constantly downloading the 4- 64GB and one 32GB Sony QXD memory cards. It would take anywhere from 9-12 minutes to download a 64GB card to the laptop.

DCR: How long is the documentary and will it be broken into episodes or shown in its entirety?

AC: Muay Thai Madness is a 30-minute long show. With the large amount of footage, I am now developing a companion series called, Lords of the Ring. It will follow fighters as they train. Interviews will examine what motivates and drives them to come from all over the world to fight here in Thailand. Thai fighters will give insight into how their training differs. Most have day jobs and don't have the luxury of being able to dedicate full time to training. I will also explore how they feel about the fallangs, the Thai word for westerners, who try to master this very Thai sport. 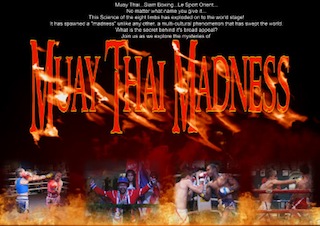 DCR: What was the most dramatic difference in working in 4K Ultra HD and other formats?

AC: As I mentioned before, the critical need for accuracy in exposure and focus. The 4K UHD screen is totally unforgiving with every flaw magnified.

DCR: What, if any, unique challenges did it present?

AC: Post-production provided new challenges as well. File sizes are huge and steady playback without a heavy-duty workhorse of a computer with a beefy graphics card and raid, 4K UHD is next to impossible. It is unthinkable to try and edit without a 4K UHD TV as a check screen.

DCR: What, if any, unique advantages did 4K Ultra HD provide?

AC: As filmmakers we want to reveal our subjects inner feelings and passion. Along with that, we want to present stunningly beautiful visuals. 4K UHD affords us the opportunity to do that on a scale that we have never had before. Couple that with the technical advantages of a wider dynamic range and increased color gamut gives filmmakers the tools to push the envelope to new heights in production.

DCR: What format or formats will be used for distribution?

AC: As 4K UHD is still a developing technology, that list is ever growing. (Many distribution deals are in the works that I can't talk about yet.) What I can tell you is that UltraFlix, Amazon UHD, Sony's UHD TV box, DirecTV are just a few that are already in process. The requirements vary from delivering in ProRes444 to H.265 HEVC are so far the most requested format delivery specs.

AC: Yes, absolutely, I am hooked! I just returned from Miami where I am working on several productions with Bernard Salzman at Quasar Entertainment. The Next American Tennis Star, Michelle Lewin's BodyWorx and Iron Justice are just a few of the productions in the pipeline there. Both are being dual shot in 4K UHD and 3D. In Thailand, Lords of the Ring and the World Martial Arts Games are in various stages of production.

Finally, I just signed a co-production deal to shoot a documentary about Ankor Wat in 4K.The beauty of Angkor Wat are well known but yet unexplored in 4K UHD. Surviving for almost 1000 years Angkor Wat, the City of Temples, is steeped in mystery and myth. Built over a 30-year period, beginning in the year 1113. Lost to most of the world for centuries, and color what was read discovered in 1860 by the French. The intricate detail and spectacular carvings are well suited for the 4K UHD medium. We will explore this recreation of Mount Meru, or heaven for Buddhist and Hindu's. From the stone temples at Angkor covered with 1850 intricate carvings of the dancing flying and singing angels called Apsaras to the cobra like images bearing seven, nine or 11 heads Naga or Snake King.

I believe 4K UHD will eventually replace HD as the production standard.