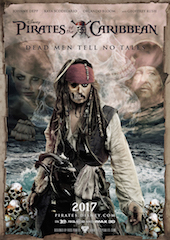 ScreenX, the multi-projection system that provides a 270-degree panoramic film viewing experience within a theatre setting, announced today that the fifth installment of Disney and Jerry Bruckheimer Films’ Pirates of the Caribbean franchise will be available in the immersive format. Pirates of the Caribbean: Dead Men Tell No Tales is the first Disney film to be converted into the format, and will be available in seven countries.

In addition to opening in the ScreenX format, the film will also be premiering in CJ 4DPlex’s alternative immersive format, 4DX. The film is set to open on 373 4DX screens in 48 countries around the world.

Pirates of the Caribbean: Dead Men Tell No Tales will be available at a total of 83 pre-existing ScreenX locations throughout the world. The pre-existing locations include Korea, China, Thailand, Vietnam, Turkey, Indonesia and the United States.

“ScreenX is an exciting format that we’ve been keeping our eyes on for a while now. We’re looking forward to providing moviegoers a chance to view our film in the format and are confident that the immersive 270-degree viewing experience will be a big success,” said Jeffrey Forman, senior vice president, The Walt Disney Studios.

“Seeing our film span three entire walls of an auditorium, and to be able to have the film extend beyond the screen has been exciting. We look forward to showcasing the end product and giving fans the opportunity to experience it in ScreenX,” said Jerry Bruckheimer, producer, Pirates of the Caribbean: Dead Men Tell No Tales.

“We’re extremely thrilled to be working with Disney and to be able to premiere the newest installment of the famous franchise in our ScreenX format. We truly believe the 270-degree panoramic ‘screen’ offers a beautifully immersive viewing experience,” said Byung Hwan Choi, CEO of CJ 4DPlex.